Hillary, aug. 2020: “Its gonna be a close election… Biden should not concede under any circumstances” 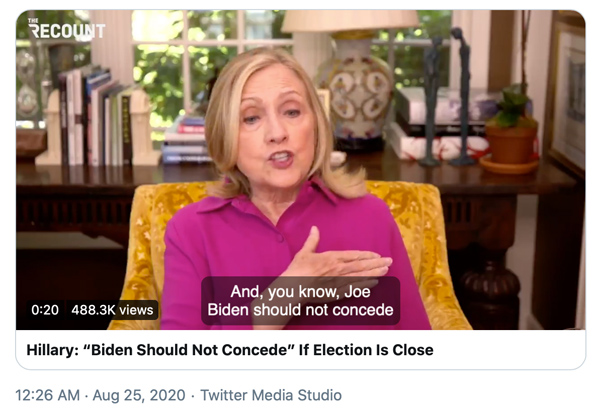 “Look, Its gonna be a close election. … We’ve got to have a massive legal operation. I know the Biden campaign is working on that. We have to have poll workers, and I urge people who are able to be a poll worker. We have to have our own teams of people to counter… This is a big organizational challenge … And you know, Joe Biden should not concede under any circumstances…Eventually, i do believe he will win, if we don’t give an inch, and if we are focused and relentless as the other side is.” (Hillary Clinton, 25. august 2020)

“Hillary Clinton’s campaign intends to back the statewide election recount effort in the battleground state of Wisconsin spearheaded by third-party candidate Jill Stein. … Stein, the Green Party’s presidential nominee, also has plans to file recount efforts in Michigan, where NBC News has yet to officially call a winner, and Pennsylvania.

Saturday afternoon, she indignantly tweeted, ‘I will do a recount in any state where the deadline has not passed.‘

Trump still holds narrow leads in all three states, and his victories in Pennsylvania and Wisconsin provided him with the Electoral College advantage he needed to win the presidency.

Elias acknowledged that ‘the number of votes separating Donald Trump and Hillary Clinton in the closest of these states — Michigan —  well exceeds the largest margin ever overcome in a recount,’ but he said the Clinton campaign felt it was ‘important, on principle,’ to take part in and monitor the process.

If Stein follows through with her promise to pay for recounts in Michigan and Pennsylvania, Elias wrote, the campaign will ‘take the same approach’ with additional states and participate in any verification efforts there.

… It’s an endeavor that will take long hours, hundreds of election workers and millions of dollars — and one that Stein herself admits may not change a thing about Trump’s defeat of Clinton.