“[Tell Abbas] that he should stay strong in his spirit and play for time, that he will not break and will not yield to President Trump’s demands,” Kerry said, according to Maariv, a newspaper in Israel.

Kerry added that he doesn’t expect Trump will be in office within a year.

Gingrich said as a former secretary of state, Kerry knows giving such advice would be “anti-American.”

“That kind of advice would be stunningly unpatriotic,” Gingrich told “Fox and Friends” Thursday. “And I don’t think John Kerry would do something like that. I hope he wouldn’t … I would be very surprised if secretary of state Sen. John Kerry would have said anything that was overtly anti-American.”

Newt Gingrich: It would be ‘stunningly unpatriotic’ if John Kerry told Palestinians not to give into Trump 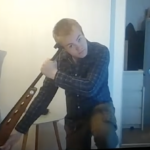