Om dobbelte standarder: “… threats of violence for the favorite leftist cause are always acceptable.”

“Much has been made of the president’s speech on January 6. The frequent allegation is that it was ‘reckless’ and that it ‘incited’ the rioters who assaulted the Capitol. Since I was not only present at that speech on the Ellipse behind the White House, but was given a literal front-row seat mere feet from the president’s bullet-proof, glass-encased podium, I must disagree.

There was nothing in the least reckless that was said. The president believes this election was stolen. I emphatically agree. He went through chapter and verse of why he believes this, thoroughly documenting his belief. Then he said this:

‘I know that everyone here will soon be marching over to the Capitol building to peacefully and patriotically make your voices heard.’

That is decidedly not a call to riot. In fact, before the president had even shown up I was informed by someone with no White House connections that many in the crowd were going to march up Pennsylvania Avenue to protest at the Capitol. Doubtless word of this reached the president, which is why he said, ‘I know that everyone here will soon be marching over to the Capitol building.’

… quite clearly 99.9 percent of the crowd of thousands was peaceful. My own videos of the White House rally are filled with rock music and a crowd dancing to music — a crowd of families, men, women and children, all races and a gay group as well.

… In 2020, Democrats repeatedly egged on violence in one city after another. Only this week California Congresswoman Maxine Waters has vowed to ‘take Trump out.’ Then there was Waters’ call to physically confront members of the Trump administration, saying this:

‘If you see anybody from that cabinet in a restaurant, in a department store, at a gasoline station, you get out and you create a crowd, and you push back on them, and you tell them they’re not welcome anymore, anywhere.’ 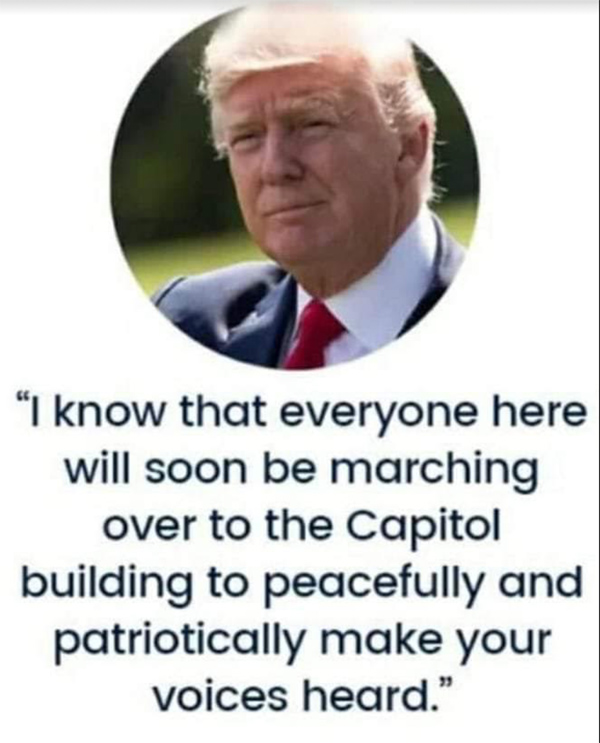 Will her colleagues hold her responsible? Will she be censured? Of course not. Because threats of violence for the favorite leftist cause are always acceptable.

Politically speaking Democrats should never have a moment’s peace in the next four years. Here’s a thought experiment: If Donald Trump raised bail money for some of the Capitol rioters, imagine the reaction.

In fact, Kamala Harris did just that. The text of her tweet is this: ‘If you’re able to, chip in now to the @MNFreedomFund to help post bail for those protesting on the ground in Minnesota.’ She notoriously appeared on Stephen Colbert’s show and said of the rioters violently trashing and burning a number of American cities:

Now that would be incitement to violence. This is decidedly impeachment-worthy.”