Imagine the scene: the morning Catholic mass in the northern French town of Saint-Étienne-du-Rouvray, an almost empty church, three parishioners, two nuns and a very old priest. Knife-wielding ISIS terrorists interrupt the service and slit the throat of Father Jacques Hamel. This heartbreaking scene illuminates the state of Christianity in Europe. 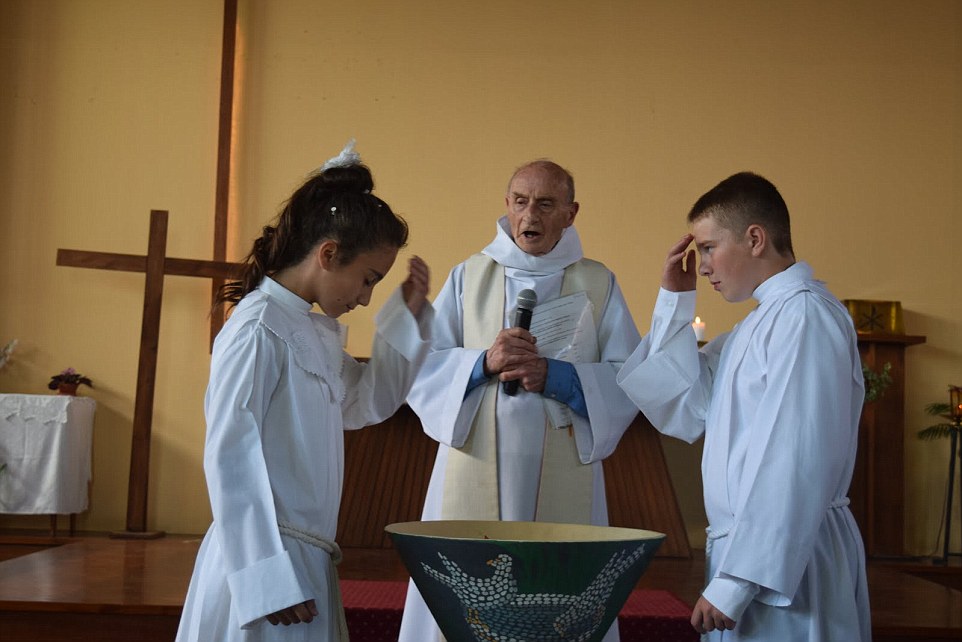 Father Jacques Hamel was murdered this week, in the church of Saint-Étienne-du-Rouvray, by Islamic jihadists.

It happened before. In 1996 seven French monks were slaughtered in Algeria. In 2006, a priest was beheaded in Iraq. In 2016, this horrible Islamic ritual took place in the heart of European Christianity: the Normandy town where Father Hamel was murdered is the location of the trial of Joan of Arc, the heroine of French Christianity.

France had been repeatedly warned: Europe’s Christians will meet the same fate of their Eastern brethren. But France refused to protect either Europe’s Christians or Eastern ones. When, a year ago, the rector of the Great Mosque of Paris, Dalil Boubakeur, suggested transforming empty French churches (like that one in Saint-Étienne-du-Rouvray) into mosques, only a few French intellectuals, led by Alain Finkielkraut and Pascal Bruckner, signed the appeal entitled, “Do not touch my church” (“Touche pas à mon église“) in defense of France’s Christian heritage. Laurent Joffrin, director of the daily newspaper Libération, led a left-wing campaign against the appeal, describing the signers as “decrepit and fascist“.

For years, French socialist mayors have approved, in fact, the demolition of churches or their conversion into mosques (the same goal as ISIS but by different, “peaceful” means). Except in the Saint-Germain-des-Prés quarter of Paris, and in some beautiful areas such as the Avignon Festival, France is experiencing a dramatic crisis of identity.

While the appeal to save France’s churches was being demonized or ignored, the same fate was suffered by endangered Eastern Christian being exterminated by ISIS. “It is no longer possible to ignore this ethnic and cultural cleansing”, reads an appeal signed by the usual combative “Islamophobic” intellectuals, such as Elisabeth Badinter, Jacques Julliard and Michel Onfray. In March, the newspaper Le Figaro accused the government of Manuel Valls of abandoning the Christians threatened with death by ISIS by refusing to grant them visas.

Go around Europe these days: you will find not a single rally to protest the killing of Father Hamel. In January 2015, after the murderous attack on Charlie Hebdo, the French took to the streets to say “Je suis Charlie”. After July 26, 2016, the day an 85-year-old priest was murdered in a church, nobody said “We are all Catholics”. Even Pope Francis, in the face of the most important anti-Christian event on Europe’s soil since the Second World War, stood silent and said that Islamists look “for money“. The entire Vatican clergy refused to write or say the word “Islam”.

Truth is coming from very few writers. “Religions overcome other religions; police can help little if one is not afraid of death.” With these words, six months after the massacre at the magazine Charlie Hebdo, the writer Michel Houellebecq spoke with the Revue des Deux Mondes. Our elite should read it after every massacre before filling up pages on “intelligence failures.”

It is not as if one more French gendarmerie vehicle could have stopped the Islamist who slaughtered 84 people in Nice. Perhaps. Maybe. But that is not the point. Ritually, after each massacre, Europe’s media and politicians repeat the story of “intelligence failures”. In the case of the attack in Saint-Étienne-du-Rouvray, the story is about a terrorist who was placed under surveillance.

The “intelligence failure” theory is a fig leaf to avoid mentioning Islam and its project of the conquest of Europe. It is the conventional code of conduct after any Islamist attack. Then they add: “Retaliation” creates a spiral of violence; you have to work for peace and show good intentions. Then, in two or three weeks, comes the fatal “we deserve it”. For what? For having a religion different from them?

We always hear the same voices, as in some great game of dissimulation and collective disorientation in which no one even knows which enemy to beat. But, after all, is it not much more comforting to talk about “intelligence” instead of the Islamists who try, by terror and sharia, to force the submission of us poor Europeans?

Europe looks condemned to a permanent state of siege. But what if, one day, after more bloodshed and attacks in Europe, Europe’s governments begin negotiating, with the mainstream Islamic organizations, the terms of submission of democracies to Islamic sharia law? Cartoons about Mohammed and the “crime” of blasphemy have already disappeared from the European media, and the scapegoating of Israel and the Jews started long time ago.

After the attack at the church, the French media decided even to stop publishing photos of the terrorists. This is the brave response to jihad by our mainstream media, who also showed lethal signs of cowardice during the Charlie Hebdo crisis.

The only hope today comes from an 85-year-old French priest, who was murdered by Islamists after a simple, noble gesture: he refused to kneel in front of them. Will humiliated and indolent Europe do the same?