“A terror suspect accused of stabbing three people to death and seriously injuring three others in an attack in Reading fled Libya seven years ago and was granted refugee status in the UK because he feared Islamists, and later converted to Christianity, MailOnline can reveal.

A relative of Khairi Saadallah, 25, says the terror suspect arrived in the UK as a tourist in 2012 before claiming asylum because he was at risk from Islamic extremists due to him not leading a ’strict religious life’ in Libya.

‘He started going to church and had tattoos all over his body including one of a cross on his arm. I haven’t had contact with him since that time.” (Daily Mail, 21. juni 2020)

“Gary, a neighbour who did not wish to give his surname, told the Guardian: ‘All he [Khairi Saadallah’s relative] wanted was a quiet life. The first time I met him was when I heard people shouting anti-Muslim abuse at him. They called him a terrorist. I told them they were a bunch of liars… When there was trouble [with anti-Muslim abuse], I wrapped my arms around him and said don’t react, they are the ones in the wrong.” (The Guardian, 21. juni 2020) 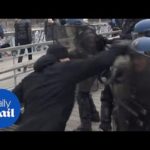