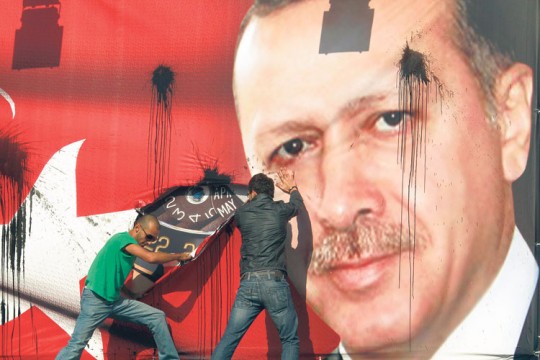 “We can open the doors to Greece and Bulgaria anytime and we can put the refugees on buses … So how will you deal with refugees if you don’t get a deal? Kill the refugees?” This was the question Turkish President Recep Tayyip Erdogan, in true mafia style, asked European Council President Donald Tusk and European Commission President Jean-Claude Juncker on November 16, 2015 in a closed meeting in Antalya, Turkey, where the three met after the G20 summit.

While Tusk and Juncker have both declined to comment on whether the meeting took place, Erdogan has since then boasted that he is proud of the leaked minutes of the meeting, where he boldly blackmails EU leaders into paying him protection money.

Finally, feeding into the denial/ignorance of the European elites, who were at that time reeling from the Paris terror attacks that had occurred just three days earlier, Erdogan — who himself has hosted and supported terrorist groups from Hamas to Hezbollah to ISIS — told his European colleagues,

“The attacks in Paris is [sic] all about poverty and exclusion. These people… will continue to be terrorists in Europe”.

The leaked minutes furthermore showed Tusk and Juncker pleading with Erdogan, almost begging him to see reason, pathetically telling him that the EU has been treating him “as a prince in Brussels.”

“Like a prince?” Erdogan retorted, “Of course. I’m not representing a third world country.” He also told Juncker, who is the former prime minister of Luxembourg, not to compare Luxembourg to Turkey: “Luxembourg is just like a town in Turkey.”

In a speech in Ankara on February 7, 2016, referring to the meeting with Juncker and Tusk, Erdogan boasted:

“I am proud of what I said. We have defended the rights of Turkey and the refugees. And we told them: ‘Sorry, we will open the doors and say goodbye to the migrants.'” He then proceeded to repeat that very threat:

“In the past we have stopped people at the gates to Europe, in Edirne we stopped their buses. This happens once or twice, and then we’ll open the gates and wish them a safe journey, that’s what I said. … We do not have the word ‘idiot’ written on our foreheads. Don’t think that the planes and the buses are there for nothing. We will show patience up to a point and then we’ll do what’s necessary.”

A little over a month after Erdogan’s latest threats, in February 2016, it all paid off. Erdogan received the European Union’s assurance that his wishes had been granted in the form of the March 18 “EU-Turkey Statement.” According to this agreement, the EU will pay Ankara € 6 bn over the next two years to be spent on Syrian refugees already in Turkey. Furthermore, by June 2016, at the latest, 80 million Turkish citizens will have visa-free access to the European Union, tempered by the EU requirement that Turkey has met “all benchmarks” by then. The promise to lift the visa requirements for Turkish citizens should be seen as real, however, and unlikely to be turned down because of “benchmarks” not being met — especially as another part of the agreement clearly constitutes lip service, namely the commitment to “re-energize” Turkey’s accession process to the European Union.

What has Turkey promised to do in return for these very tangible benefits? It has agreed that all new “irregular migrants” crossing from Turkey into Greek islands as of 20 March 2016 will be returned to Turkey. The agreement stipulates that this will take place

“in full accordance with EU and international law, thus excluding any kind of collective expulsion. Migrants arriving in the Greek islands will be duly registered and any application for asylum will be processed individually by the Greek authorities in accordance with the Asylum Procedures Directive, in cooperation with UNHCR [United Nations High Commissioner for Refugees]. Migrants not applying for asylum or whose application has been found unfounded or inadmissible in accordance with the said directive will be returned to Turkey.”

For every Syrian being returned to Turkey from Greek islands, another Syrian will be resettled from Turkey to the EU – up to 72,000 Syrians. Priority will be given to migrants who have not previously entered the EU and to those who have not tried to enter the EU illegally. Furthermore, Turkey will take any necessary measures to prevent the opening of new sea or land routes for illegal migration from Turkey to the EU.

By succumbing to what amounts to Turkey’s blackmail, the EU hopes to stop the people-smugglers who operate out of Turkey, and end the stream of migration between Turkey and the EU — or as the agreement says, “substantially and sustainably reduce it.” They are also hoping that the agreement in itself will stem the flow by discouraging migrants from attempting the dangerous route, when they know that chances are that they will be returned to Turkey.

Seen from Europe’s own, hallowed, self-declared humanitarian principles, the deal represents not only a cop-out to Erdogan’s thuggish blackmail, but a complete sell-out: not even European leaders can pretend that Erdogan’s Turkey represents a “safe third country.” What will happen with the migrants, once they are returned to Turkey, no one knows. That much is clear from the EU’s own answer to the question of how it can be sure that returned refugees or migrants will be given protection in Turkey. The EU’s circular non-answer went: “Only asylum seekers that will be protected in accordance with the relevant international standards and in respect of the principle of non-refoulement will be returned to Turkey.” As if Turkey under Erdogan has become world famous for respecting “international standards.”

As late as March 18, on the day that the EU-Turkey Statement became official, Erdogan stated, “Democracy, freedom and the rule of law… For us, these words have absolutely no value any longer.” The words “any longer” were only put there for show — as any observer of Erdogan’s Turkey will tell you, democracy, freedom and the rule of law, have never held any value for Erdogan.

Contrary to the views of the EU and the Obama Administration, Erdogan is not a democrat, and never has been. He has dedicated his career to transforming secular, ‎European-oriented Turkey into an Islamist state, and has repeatedly rejected Western attempts to portray his rule as an example of “moderate Islam.” He ‎says that such a concept is “ugly and offensive; there is no moderate Islam. Islam is Islam.”

As a young man, Erdogan embarked upon a career in Islamist movements and parties, in direct opposition ‎to the secular Kemalists, whose goal it was to keep Turkey a secular democracy with religion a wholly ‎private matter. One of the parties in which Erdogan was active, the Refah Party, was described by the Turkish historian Soner Cagaptay as “an explicitly Islamist party, which featured strong anti-‎Western, anti-Semitic, anti-democratic and anti-secular elements.” ‎Erdogan was arrested and convicted for religious incitement in 1998 after Refah was banned by Turkey’s constitutional court.‎

When Erdogan returned to the scene in 2002 with the so-called Justice and Development Party (AKP), his Islamist credentials could hardly be swept ‎under the carpet in a Turkey that was still committed to a secular state.

So what do you do if you want to ‎appear palatable to the secularists and the West? You introduce Islamic sharia law slowly ‎and cautiously, in a piecemeal fashion. That is what Erdogan has done: gradually bringing all the former secular ‎bulwarks against Islamists under his own Islamist sphere of influence — the educational system, the courts ‎and even the military.

The agreement with Turkey should not be cause for celebration in Europe. Erdogan’s threats shaped the deal in a way that casts doubt on any hope of him actually abiding by the vain European dream of ending the flow of migrants from Turkey and Europe. The question, though, is not just a matter of his willingness, which is open to dispute. It is as much a question of whether Turkey is even capable of stopping the people-smugglers. The latter would appear open to doubt. “Ankara is likely to have made promises in Brussels that it can’t and won’t deliver,’ said Aykan Erdemir, a former opposition politician, now a senior fellow at the Foundation for Defense of Democracies in Washington. “Human smugglers will outsmart the Turkish authorities just as they have outsmarted EU authorities.”

Even if one assumes that Turkey is both willing and able to close down the migration routes between Turkey and Greece, it is inconceivable that the Turkish people-smugglers will simply give up their blockbuster business. It is far more likely that they will open up even longer and more dangerous routes from Turkey to Italy. And if this contravenes the agreement with the EU, there is no mechanism to stop Turkey from turning a blind eye to them.

“Everybody knows that nobody can stop a smuggler — they’ll always find a way,” Ahmad, a Syrian who was smuggled into the UK, told the Spectator; “It will simply become more expensive.”

That is of course the nightmare scenario for a desperate EU: No matter how hard it tries, or how much it bows to extortionist demands from Turkey, the migrant crisis will continue to grow. Even if Turkey closes down all routes from Turkey into Europe, refugees could take new routes through North Africa or the Caucasus. The deal with Turkey, in other words, is a far cry from being a cure.

A German think tank has simulated expected migrant flows through Europe this year, and has come up with an estimated range of 1.8 to 6.4 million people — the latter being a worst-case scenario that would include large numbers from North Africa. According to French Defense Minister Jean-Yves le Drian, quoted on March 24, 800,000 migrants are currently in Libyan territory waiting to cross the Mediterranean.

This is what Angela Merkel arguably started with her promise to receive every refugee in Germany, and this is what her EU colleagues are now desperately trying to stop. Perhaps they are not trying hard enough. In the leaked minutes from the meeting with Erdogan, Tusk told Erdogan, “…the EU can make itself less attractive to refugees, but that is not the solution we want.” Many Europeans might not agree with him. 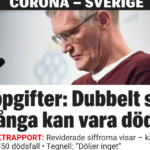 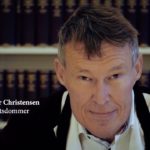 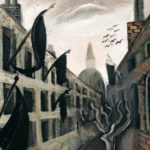