Jack Unterweger, fra morder til mediedarling: “… reported on the very murders he was committing” 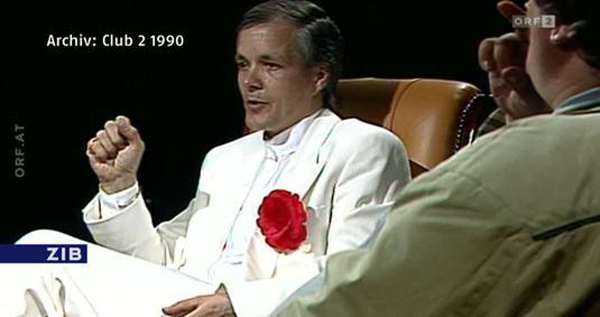 “Jack Unterweger was a model prisoner. He was living proof that, no matter what a man had done in his life, it was never too late for him to turn things around. … He was proof that anyone could change — or so his supporters that campaigned for his early release thought. But all of that went up in smoke when, shortly after his release in 1990, Jack Unterweger went on a killing spree that ended the lives of at least nine women. …

It was a strange sentiment to hear coming from a man who took pleasure in choking and brutalizing prostitutes, but it was the type of writing that won over many of the most respected members of Austria’s intellectual community while he was in prison. His autobiography convinced the world that he was a sensitive soul who went mad because he had grown up without a mother, and his skill with words persuaded many people that he now deserved to be free.

Once word of Jack Unterweger’s writings spread, thousands called for his immediate release. It didn’t matter what he had done, they said, Jack Unterweger was proof that art could heal any tortured soul, and he needed to be freed. As a statement signed by supporters put it, ‘Austrian justice will be measured by the Unterweger case.’
Huge names supported him. Two Nobel Prize winners, Elfriede Jelinek and Günter Grass, joined the movement, calling for his freedom and praising his writing.

.. In 1990, after he had served the minimum 15 years of his sentence, he was released. As Unterweger rejoined the public, the prison governor declared: ‘We will never find a prisoner so well prepared for freedom.’

Despite everything his supporters had claimed, in the first year after his release, Jack Unterweger murdered eight people. The murders followed Unterweger’s modus operandi: the women were dragged out into the woods, beaten, and strangled with their own underwear.

… while he was perpetrating this killing spree, Unterweger was interviewed on talk shows and praised both as a model of prison rehabilitation and as a brilliant writer. He was even hired by an Austrian magazine and at times reported on the very murders he was committing.

Such work also brought him to the United States on a mission to report on the ‘terrible conditions’ suffered by American prostitutes. While there, he checked into the infamous Cecil Hotel, snuck out at night, and murdered women just like those on whom he had been sent to report.”