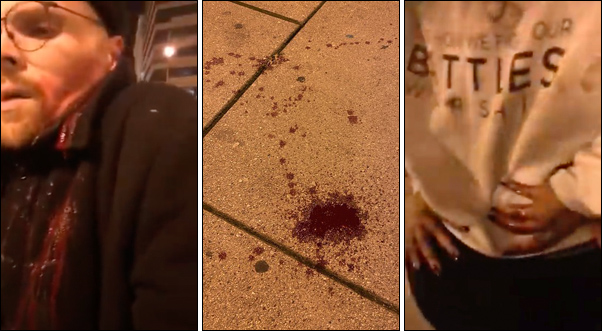 “Enrique Tarrio told the Gateway Pundit that he was slashed in the stomach, while ‘multiple other members’ were injured, including a man stabbed in the neck and a woman with them stabbed in the back.

The group said they were heading home after watching the election at a DC bar when they were jumped and knifed just blocks from the White House.

… After the attackers fled, Bevelyn Beatty — a black woman… was seen holding her lower back, saying, ‘They stabbed me.’

‘We just got jumped by Black Lives Matter and they just stabbed Bevelyn Beatty,’ Loh said in her video, which showed a trail of blood on the sidewalk.

Moments later, Loh went up to the man seen clutching his neck at the start of her clip — suddenly gasping, ‘Oh my God, you’ve got tons of blood coming out of your neck!’

‘Yes I do!’ said the panicked-sounding man, still clasping the wound.

The group flagged down police and medics, telling them, ‘We just got jumped by Black Lives Matter here.’

DC police said early Wednesday that they were looking for two men dressed all in black as well as a woman wearing black sweatpants, orange leggings and a dark gray coat — and ‘armed with a knife.’“