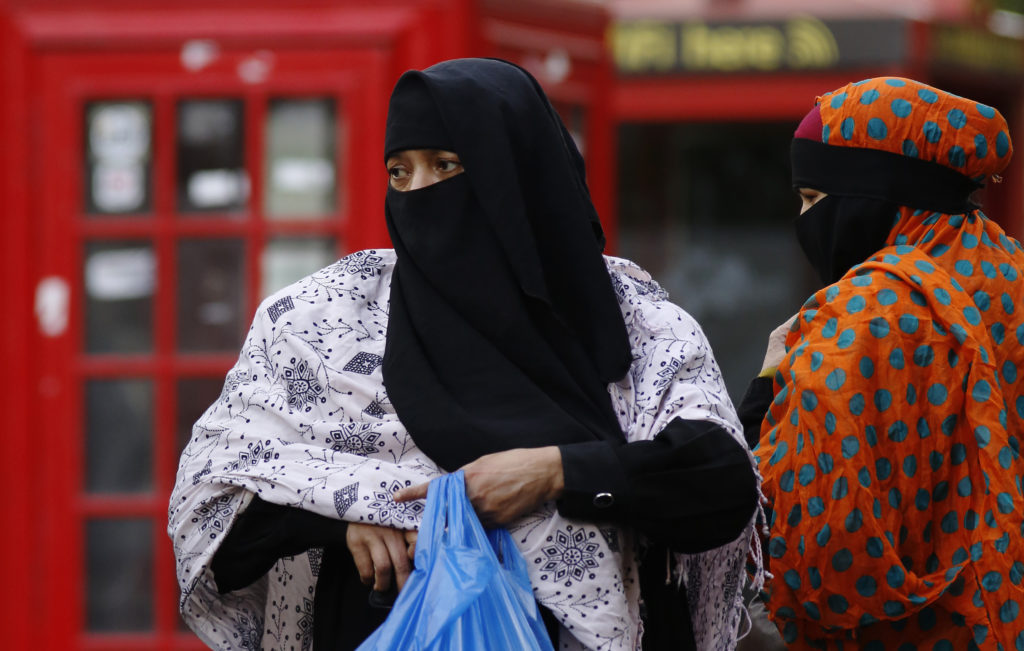 Former foreign secretary (and possible future prime minister) Boris Johnson sparked a political firestorm after making politically incorrect comments about the burka and the niqab, the face-covering garments worn by some Muslim women.

The ensuing debate over Islamophobia has revealed the extent to which political correctness is stifling free speech in Britain. It has also exposed deep fissures within the Conservative Party over its future direction and leadership.

In an August 5 essay published by the Daily Telegraph, Johnson argued that he was opposed to Denmark’s burka ban because the government should not be telling women what they may or may not wear in public. Johnson wrote:

“What has happened, you may ask, to the Danish spirit of live and let live? If you tell me that the burka is oppressive, then I am with you. If you say that it is weird and bullying to expect women to cover their faces, then I totally agree — and I would add that I can find no scriptural authority for the practice in the Koran. I would go further and say that it is absolutely ridiculous that people should choose to go around looking like letter boxes….

“If a constituent came to my MP’s surgery [one-on-one meetingsbetween MPs and their constituents] with her face obscured, I should feel fully entitled… to ask her to remove it so that I could talk to her properly. If a female student turned up at school or at a university lecture looking like a bank robber, then ditto: those in authority should be allowed to converse openly with those that they are being asked to instruct.”

The response from senior Conservatives was immediate.

Prime Minister Theresa May said that Johnson “was wrong” in the language he used to describe women who use the burka. She added that Johnson had “clearly caused offense” and demanded that he apologize:

“I do think that we all have to be very careful about the language and terms we use. And some of the terms Boris used describing people’s appearance obviously have offended. What’s important is do we believe people should have the right to practice their religion and, in the case of women and the burka and niqab, to choose how they dress. I believe women should be able to choose how they dress.”

Tory peer Mohamed Sheikh, founder of the Conservative Muslim Forum, said that Johnson had “let the genie out of the bottle” and called for Johnson to be removed from the party. 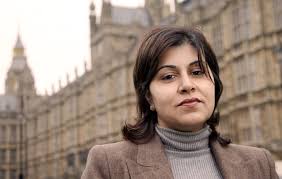 Conservative Member of the House of Lords Sayeeda Warsi — who herself has said that she hopes women in Britain will stop wearing the Islamic face veil within the next 10 or 20 years — accused Johnson of “Islamophobia” and said he should be required to attend diversity training:

“In his Telegraph piece, Johnson was making a liberal argument. He was saying that we shouldn’t ban the burqa, as Denmark has done. But his words signaled something else. He said — not only to those Muslim women who veil, but to many more who associate with a faith in which some women do — that you don’t belong here….

“He set out a liberal position, but he did it in a very ‘alt-right’ way. This allowed him to dog-whistle: to say to particular elements of the party that he’s tough on Muslims. Yet again, he’s trying to have his cake and eat it….

“An apology is now due. But what happens if, as looks likely, it doesn’t come? Every time incidents like this occur in the party and there are no consequences, it sends out a clear message that you can get away with Islamophobia.

“As far as Boris Johnson is concerned, this is surely time for the promised diversity training scheme to kick in.”

Johnson has refused to apologize, and the Conservative Party has now launchedan inquiry into whether Johnson’s comments violated its code of conduct, which states that Tory officials and elected representatives must “lead by example to encourage and foster respect and tolerance” and not “use their position to bully, abuse, victimise, harass or unlawfully discriminate against others.”

Britain’s most senior police officer, Met Police Commissioner Cressida Dick, said that she had consulted hate-crime specialists and determined that Johnson’s comments did not break the law:

“I know that many people have found this offensive. I also know that many other people believe strongly that in the whole of the article, what Mr Johnson appears to have been attempting to do was to say that there shouldn’t be a ban and that he was engaging in a legitimate debate.

“I spoke last night to my very experienced officers who deal with hate crime and, although we have not yet received any allegation of such a crime, I can tell you that my preliminary view having spoken to them is that what Mr Johnson said would not reach the bar for a criminal offence.”

“It’s hard to see what he should apologise for. He has defended people’s right to wear the burka whilst saying it is an inelegant garment. Neither of those proposals are unreasonable.”

“I believe this is politically motivated, by the internal politics of the Tory party, by politicians who want to humiliate and destroy Boris Johnson. I believe that the public will see this for what it is — an internal Conservative party witch hunt instigated by Number Ten against Boris Johnson, who they see as a huge threat.”

“Looking at those who have jumped on the bandwagon of protest, the vast majority appear to be ardent Remain campaigners, who still bewildered that the public could have a different viewpoint to them, still seek to lay the blame at their defeat at the door of Boris Johnson. These same people remained stoney silent when lifelong Remainer Ken Clarke enlightened us with his views of the burka: ‘I do think it’s a most peculiar costume for people to adopt in the 21st century, but that’s not to me for decide, when they’re not engaged in some serious issue such as giving evidence. That’s the bit that I think it’s almost impossible to have a proper trial if one of the persons is in a kind of bag’…

“It is clear that this is not about standing up for the rights of Muslim women to wear the burka, if that is what they really want to do? This is about getting Boris. The great irony of all of this is many EU Countries who those criticising Boris are desperate to stay in political union with have in fact banned the burka. Not the fringe countries but France, Germany, Austria, Belgium, Bulgaria and now Denmark, with a partial ban even in the uber-liberal Netherlands.

“I myself, am the chairman of the All-Party Parliament Group for Uzbekistan, a country which is 90% Muslim, enjoys great religious harmony and interestingly which banned face coverings in 1992.

“Unfortunately, in using this issue as a stick to beat Boris, Theresa May and some of the members of her government have shown themselves to be once again totally out of step with the views of the majority of members of the Conservative Party and indeed of the public as a whole.”

“I wonder how many of those who are now jumping up and down calling for Johnson to have the Conservative whip withdrawn [disciplinary measure], or to be expelled from the party altogether, actually read his original Telegraph article which has apparently offended them so much. Had they done so, they would surely remember that he states he does not believe the burka and niqab should be banned in Britain – a ban which is already in full force in EU nations like France, Germany, Denmark, Austria and Belgium.

“Having set out his liberal position, he then augments it by taking up the feminist argument that he thinks it is ‘oppressive’ to force women to cover their faces in public. For emphasis he offers his opinion that it is ‘weird’ and ‘bullying’ to expect them to do so. And then he says it is ‘ridiculous’ that women should go around ‘looking like letter boxes’.

“Absurdly, this opinion has been seized upon as ‘Islamophobic’ or ‘racist’. An essentially liberal commentator is being pilloried for expressing his belief using, what I accept, is rather playful language. But to suggest he should be kicked out of his party is nothing but lunacy. To Boris I say: stand firm…

“Taken to its logical conclusion, the anti-Johnson brigade’s stance would mean that nobody is allowed to offer their view on any matter in case it causes offence. Is that really the kind of country we want to live in? Remember – ironically, we are talking in this case about a politician who has stated he thinks it illiberal to ban the burka…

“We live in a country that used to believe passionately in free speech. As we all know, even when exercised with care and responsibility, free speech can and does offend some people. But timid politicians who take the easy option and prefer not to tell people what they really think about things like the burka are killing this vital right.

“By allowing politics to become too PC, they are damaging democracy in such a way that it will be extremely difficult for future generations to repair, ultimately condemning them to a society where nobody is allowed to be honest about anything.”

An imam at Oxford Islamic Congregation, Taj Hargey, wrote that Johnson did not go far enough:

“Boris Johnson should not apologise for telling the truth. His evocative analogy is unfortunate but he is justified in reminding everyone that the Wahhabi/Salafi-inspired fad of female facial masking has no Koranic legitimacy. It is, however, a nefarious component of a trendy gateway theology for religious extremism and militant Islam.

“The burka and niqab are hideous tribal ninja-like garments that are pre-Islamic, non-Koranic and therefore un-Muslim. Although this deliberate identity-concealing contraption is banned at the Kaaba in Mecca it is permitted in Britain, thus precipitating security risks, accelerating vitamin D deficiency, endorsing gender-inequality and inhibiting community cohesion.

“It is any wonder that many younger women have internalised this poisonous chauvinism by asserting that it is their human right to hide their faces?

“Johnson did not go far enough. If Britain is to become a fully integrated society then it is incumbent that cultural practices, personal preferences and communal customs that aggravate social division should be firmly resisted.”

“As a lifelong beneficiary of the freedom to make jokes about religion, I do think that Boris Johnson’s joke about wearers of the burka resembling letterboxes is a pretty good one. All jokes about religion cause offence, so it’s pointless apologising for them. You should really only apologise for a bad joke. On that basis, no apology is required.”

A Sky Data Poll published on August 8 found that 60% of Britons surveyed said that it is not racist to compare Muslim women wearing burkas to bank robbers and letter boxes, while 59% were in favor of a burka ban.

An August 1 poll of Tory members by ConservativeHome found that Johnson’s popularity had almost quadrupled since he resigned on July 9 after clashing with May over her vision for Brexit. He is now at the top of the list of favored successors to May.