January 27. The Ministry of Culture assigned an “18 and over” rating to “Salafistes,” a documentary which features interviews with North African jihadists. The filmmakers said the government wanted to “kill the film” by banning it from being aired on public TV, and making cinemas reluctant to show it. Filmmakers François Margolin and Lemime Ould Salem insisted that the film should be given as wide an audience as possible. “What has upset the French authorities is not the violence, but the subject itself,” Margolin said. “They want to prevent French citizens from knowing the truth.” 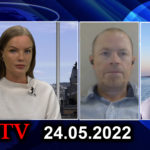