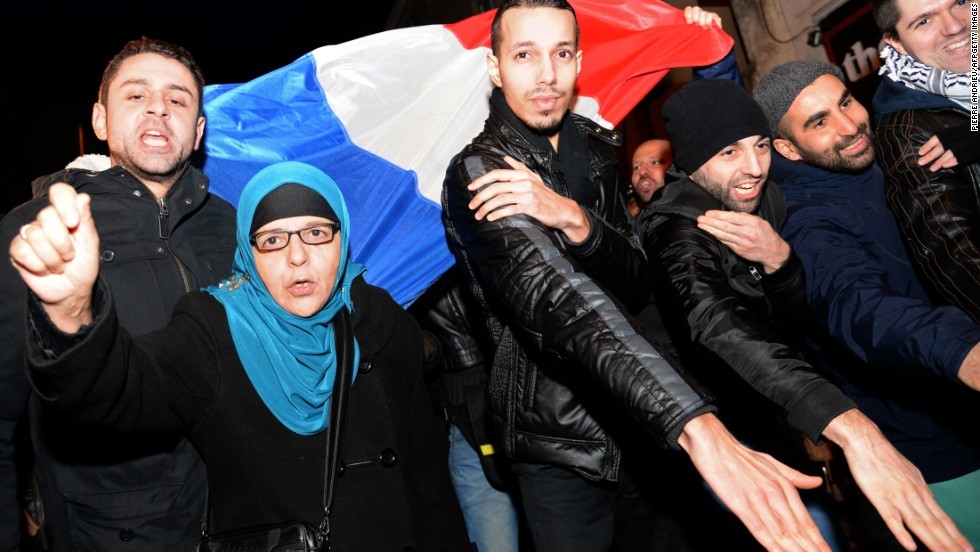 Recently, two important studies about French Muslims were released in France. The first one, optimistically entitled, “A French Islam is Possible,” was published under the auspices of Institut Montaigne, an independent French think tank.

The second study, entitled, “Work, the Company and the Religious Question,” is the fourth annual joint study between the Randstad Institute (a recruiting company) and the Observatory of Religious Experience at Work (Observatoire du fait religieux en entreprise, OFRE), a research company.

Both studies, filling a huge knowledge-deficit on religious and ethnic demography, were widely reported in the media. France is a country well-equipped with demographers, scholars, professors and research institutes, but any official data or statistics based on race, origin or religion are prohibited by law.

France has 66.6 million inhabitants, according to a report dated January 1, 2016 from the National Institute of Statistics (Insee). But census questionnaires prohibit any question about race, origin or religion. So in France, it is impossible to know how many Muslims, black people, white people, Catholics, Arabs, Jews, etc. live in the country.

This prohibition is based on an old and once-healthy principle to avoid any discrimination in a country where “assimilation” is the rule. Assimilation, French-style, means that any foreigner who wants to live in the country has to copy the behavioral code of local population and marry a native quickly. This assimilation model worked perfectly for people of Spanish, Portuguese or Polish descent. But with Arabs and Muslims, it stopped.

Now, however, despite all good intentions, the rule prohibiting collection of data that might lead to discrimination, has become a national security handicap.

When any group of people, outspokenly acting on the basis of their religion or ethnicity, begin violently fighting the fundamentals of the society where you live, it becomes necessary — in fact urgent — to know what religions and ethnicities these are, and how many people they represent.

The two studies in question, therefore, are not based on census data but on polls. The Institut Montaigne study, for example, writes that Muslims represent 5.6% of the metropolitan population of France, or exactly three million. However, Michèle Tribalat, a demographer specializing in immigration problems, wrote that the five million mark had been crossed in around 2014. The Pew Research Center estimated the Muslim population in France in mid-2010 to be 4.7 million. Other scholars, such as Azouz Begag, former Minister of Equality (he left the government in 2007) estimates the number of Muslims in France to be closer to 15 million.

The study by Institut Montaigne, released on September 18, is based on a poll conducted by Ifop (French Institute of Public Opinion), which surveyed 1,029 Muslims. The author of the study is Hakim el Karoui, a consultant who was an adviser to then Prime Minister Jean-Pierre Raffarin (2002-2005).

First were the so-called “secular” (46%). These people said they were “totally secular, even when religion occupies an important place in their lives.” Although they claim to be secular, many of them also belong to the group that favors all Muslim women wearing a hijab (58% of men and 70% of women). They also overlap with the group (60%) that supports wearing a hijab at school, although the hijab has been prohibited in schools since 2004. Many of these “seculars” also belong to the 70% of Muslims who “always” buy halal meat (only 6% never buy it). According to the study, wearing a hijab and eating only halal meat are considered by Muslims themselves as significant “markers” of Muslim identity.

A second group of Muslims, the “Islamic Pride Group” represent a quarter (25%) of the roughly thousand people polled. They defined themselves primarily as Muslims and claim their right to observe their faith (mainly reduced to hijab and halal) in public. They reject, however, the niqaband polygamy. They say they respect secularism and the laws of the Republic, but most of them say they do not accept prohibiting the hijab at school.

The last group, defined as the “Ultras”, represent 28% of those polled, and the most authoritarian profile. They say they prefer to live apart from Republican values. For them, Islamic values and Islamic law, or sharia, come first, before the common law of the Republic. They approve of polygamy and of wearing the niqab or the burqa.

“These 28% adhere to Islam in its most retrograde version, which has become for them a kind of identity. Islam is the mainstay of their revolt; and this revolt is embodied in an Islam of rupture, conspiracy theories and anti-Semitism,” according to Hamid el Karoui in an interview with Journal du Dimanche.

More importantly, these 28% exist predominantly among the young (50% are under 25). In other words, one out of every two young French Muslims is a Salafist of the most radical type, even if he does not belong to a mosque.

The question is: how many will they be in five years, ten years, twenty years? It is important to ask, because polls always present a point in time, a freeze-frame of a situation. When we know that the veil and halal food restrictions are imposed on the whole family by “big brothers,” we have to understand that a process is taking place, a secession process due to the re-Islamization of the whole Muslim community by the young.

To understand what re-Islamization means a definition of Islamism must be given. The most accurate is the definition given by one of his very fervent supporters, State Advisor Thierry Tuot, one of three judges chosen this summer to decide not to ban the burkini at the beach (…). Islamism, he writes, is the “public claim of a social behavior presented as a divine requirement and bursting into the public and political arena.” In light of this definition, the Al Karoui report shows that Islamism is unalterably spreading.

Islam at Work; Islamism on the Move

This ticking time bomb is silently working… at work.

A poll, conducted between April and June 2016 by the Randstad Institute and Observatory of the Religious Experience at Work (OFRE), surveying 1,405 managers in different companies, revealed that two managers out of every three (65%) were reporting that “religious behavior” is a regular manifestation in the workplace — up from 50% in 2015.

Professor Lyonel Honoré, Director of OFRE and author of the study, recognizes quietly that “in 95% of cases,” the “religious behavior at work is related to Muslims.”

To understand the importance of this “visible Islam” in French factories and offices today, we have to know that traditionally, the workplace was considered neutral space. The law did not prohibit any type of religious or political expression in the workplace, but by tradition, employees and employers considered that restraint must be shown by all in exercising their freedom of belief.

The 2016 Ranstad study shows that this old tradition is over. Religious symbols are proliferating in the workplace, and 95% of these visible symbols are Islamic. Overt expressions and symbols of Christianity or Judaism at work do exist, of course, but are minimal compared to Islam.

The survey considered two types of the expression of religious beliefs:

Under “disturbances at work”, this politically correct study notes that conflicts between employee and employer on religious grounds are few: a “minority event” and “only” 9% of religious disturbances in 2016. But figures for conflicts have nevertheless risen by 50%, up from 6% in 2015. Conflicts have also tripled since 2014 (3%) and nearly quintupled since 2013 (2%).

Eric Manca, a lawyer in the law firm August & Debouzy who specializes in labor law and was assisting at the press conference, said that when a conflict on religious ground turns to litigation, “it is always a problem with Islam. Christians and Jews never turn to the court against their employer because of religion.” When Islamists sue their employer, jurisprudence shows that the accusation is always based on “racism”, and “discrimination” — charges that can only make employers regret having hired them in the first place.

Sources of conflict listed include proselytizing (6%), and refusing to perform tasks (6%) — for instance, a delivery man declining to deliver alcohol to customers; refusing to work with a woman or under the direction of a woman (5%), and requesting to work only with Muslims (1%). These cases are concentrated in business sectors “such as automotive suppliers, construction, waste processing, supermarkets… and are located in peri-urban regions.”

The French model of assimilation is over. As noted, it worked for everyone except French Muslims; and public schools seem unable today to transmit republican values, especially among young Muslims. According to Hakim el Karoui:

“Muslims of France are living in the heart of multiple crises. Syria, of course, which shakes the spirit. But also the transformation of Arab societies where women take a new place: female students outnumber male students, girls are better educated than their fathers. Religion, in its authoritarian version, is a weapon of reaction against these evolutions. …. And finally, there is the social crisis: Muslims, two-thirds of child laborers and employees, are the first victims of deindustrialization.”

Islamization is growing everywhere. In city centers, most Arab women wear a veil, and in the suburbs, burqas and niqabs are increasingly common. At work, where non-religious behavior was usually the rule, managers try to learn how to deal with Islamist demands. In big corporations, such as Orange (telecom), a “director of diversity” was appointed to manage demands and conflicts. In small companies, managers are in disarray. Conflicts and litigation are escalating.

Silence of the politicians. Despite the wide media coverage around these two studies, an astounding silence was the only thing heard from politicians. This is disturbing because Institut Montaigne’s study also included some proposals to build an “Islam of France,” such as putting an end to foreign funding of mosques, and local training religious and civil leaders. Other ideas, such as teaching Arabic in secular schools “to prevent parents from sending their children in Koranic schools” are quite strange because they would perpetuate the failed strategy of integrating Islamism through institutions. Young French Muslims, even those born in France, have difficulty speaking and writing proper French. That is why they need to speak and write French correctly before anything else.

These two studies, although a start, are staggeringly insufficient. Politicians, journalists, and every citizen needs to learn more about Islam, its tenets and its goals in the country. It is unbelievable that the only tools at our disposal are inadequate opinion polls. Without knowledge, no political action — or any other action — is possible. It is a situation that immeasurably benefits aggressive political Islamists.

Without more knowledge, the denial of Islamization, and an immobility in addressing it, will continue. Willful blindness is the mother of the civil war to come — unless the people and their politicians choose to submit to Islam without a fight.

France: The Ticking Time Bomb of Islamization
by Yves Mamou
October 3, 2016 at 5:00 am
https://www.gatestoneinstitute.org/9058/france-islamization