These “Muslim textile affairs” reveal two types of jihad attacking France: one hard, one soft. The hard jihad, internationally known, consists of assassinating journalists of Charlie Hebdo (January 2015), Jewish people at the Hypercacher supermarket (January 2015) and young people at the Bataclan Theater, restaurants and the Stade de France (November 2015). The hard jihad also included stabbing two policeman in Magnanville, a suburb of Paris, (June 2016); truck-ramming to death 84 people in Nice on Bastille Day (July 14), and murdering a priest in the church of Saint-Étienne-du-Rouvray, among other incidents. The goal of hard jihad, led by ISIS, al-Qaeda, and others, is to impose sharia by terror.

The soft jihad is different. It does not involve murdering people, but its final goal is the same: to impose Islam on France by covering the country in Islamic symbols — veils, burqas, burkinis and so on — at all levels of the society: in schools, universities, hospitals, corporations, streets, beaches, swimming pools and public transportation. By imposing the veil everywhere, soft Islamists seem to want to kill secularism, which, since escaping the grip of the Catholic Church, has become the French way of “living together.”

No one can understand secularism in France without a bit of history.

“Secularism is essential if we want the ‘people’ be defined on a political basis” wrote the French historian, Jacques Sapir.

“Religious allegiance, when it turns into fundamentalism, is in conflict with the notion of sovereignty of the people. … the Nation and State in France were built historically by fighting feudalism and the supranational ambition of the Pope and Christian religion. … Secularism is the tool to return to the private sphere all matters that cannot be challenged comfortably …. Freedom for diversity among individuals implies a consensus in the common public sphere. The distinction between the public sphere and the private sphere is fundamental for democracy to exist.”

And this distinction is secularism.

The Problem Now is Political

French politicians seem to believe they are elected NOT to defend French people and the French nation, but to impose a “human rights ideology” on society. They also seem unable to understand the challenges that common people in the streets are currently facing. They are also unable or unwilling to defend the country against either hard or soft jihad.

“We must focus on everything that is effective [to fight Islamism], but there is a line that may not be crossed: the rule of law. … My government will not be the one to create a Guantanamo, French-style.”

Only Yves Michaud, a French philosopher, dared to point out that the rule of law is there to protect citizens from the arbitrary actions of the State. When a group of French Muslims attacks the entire way society is constructed, the rule of law now protects only the perpetrators.

The same is true for French President François Hollande. After the murder by two Islamists of the Father Jacques Hamel in Saint-Étienne-du-Rouvray in July 2016, he said: “We must lead the war by all means in respect of the rule of law.”

“We need to know: by all means? … Or in respect of the rule of law? What is this rule of law that authorizes a judge to release an Islamist interested in waging jihad in Syria and, because he could not go to Syria, was free while wearing an electronic bracelet, to walk the streets to slit the throat of a priest?”

She concluded: “If we want to protect our liberties, it might be interesting to take some liberties with the rule of law.”

A 46-year-old Bosnian ISIS jihadi, considered extremely dangerous, was taken into custody by the Malmö police. The terrorist immediately applied for asylum, the Swedish Migration Agency stepped in, took over the case — and prevented him from being deported. Inspector Leif Fransson of the Border Police told the local daily newspaper, HD/Sydsvenskan: “As soon as these people throw out their trump card and say ‘Asylum’, the gates of heaven open. Sweden has gotten a reputation as a safe haven for terrorists.”

In Germany: Chancellor Angela Merkel said in a press conference, at the end of July 2016, that her mission was not to defend German people and German identity but “to fulfill humanitarian obligations [towards migrants].” She added it was “our historic task… a historic test in times of globalization.”

For Western Leaders, Human Rights Has Become a New Religion

The human rights movement was born in 1948 with the Universal Declaration of Human Rights, launched by Eleanor Roosevelt. For 70 years, nine major “core” human rights treaties were written and ratified by the vast majority of countries.

Like a disease, the “human rights ideology” has proliferated in all areas of life. The United Nations website shows a list of all the human rights that are now institutionalized: they range from “adequate housing” to “youth” and include “Food”, “Freedom of Religion and Belief”, “HIV/AIDS”, “Mercenaries”, “Migration”, “Poverty”, “Privacy”, “Sexual orientation and gender identity”, “Situations”, ” Sustainable Development”, “Water and sanitation.” At least 42 categories of human rights fields are determined, each of which are split into two or three subcategories.

With what result? More than 140 countries (out of 193 countries that belong to the UN) engage in torture. The number of authoritarian countries has increased: “105 countries have seen a net decline in terms of freedom, and only 61 have experienced a net improvement” reported the NGO, Freedom House, in 2016. Women remain a subordinate class in nearly all countries. Children continue to work in mines and factories in many countries.

“Saudi Arabia ratified the treaty banning discrimination against women in 2007, and yet by law subordinates women to men in all areas of life. Child labour exists in countries that have ratified the Convention on the Rights of the Child: Uzbekistan, Tanzania and India, for example. Powerful western countries, including the US, do business with grave human rights abusers.”

Jean-Louis Harouel, Professor of the History of Law at the Paris-Panthéon-Assas University, recently published a book entitled, Les Droits de l’homme contre le peuple (Humans Rights against the People). In an interview with Le Figaro, he said:

“Human rights, are what we call in France ‘fundamental rights’. They were introduced in the 70’s. The great beneficiaries of fundamental rights were foreigners. Islam took advantage of it to install in France, in the name of human rights and under its protection, Islamic civilization, mosques and minarets, the Islamic way of life, halal food prescriptions, clothing and cultural behavior — Islamic laws even in violation of French law: religious marriage without civil marriage, polygamy, unilateral divorce of wife by husband, etc.

“Through the assertion of identity, Islamists and mainly UOIF [Union of Islamic Organizations of France — the French branch of the Muslim Brotherhood] exploited human rights to install their progressive control on populations of Northern African descent, and coerce them to respect the Islamic order. In particular, they do all that they can to prevent young [Arab] people who are born in France from becoming French citizens.”

The human rights and anti-discrimination “religion” also gave Islam and Islamists a comfortable position from which to declare war on France and all other European countries. It seems whatever crime they are committing today and will commit in the future, Muslims and Islamists remain the victim. For example, just after the November 13 terrorist attacks in France, in which more than 130 people were murdered by Islamists at the Bataclan Theater, the Stade de France, cafés and restaurants, Tariq Ramadan, an Islamist professor at Oxford University, tweeted:

“I am not Charlie, nor Paris: I am a warrant search suspect”.

Ramadan meant that because of the emergency laws and because he was a Muslim, he was an automatic suspect, an automatic victim of racism and “Islamophobia.”

In another example, just after the terrorist attack in Nice on July 14, when an Islamist rammed a truck into a crowd celebrating Bastille Day, killing at least 84 people, Abdelkader Sadouni, an imam in Nice, told the Italian newspaper Il Giornale: “French secularism is the main and only thing responsible for terror attacks.”

Global Elites against the People

The question now is: have our leaders decided to cope with the real problems of the real people? In other words, are they motivated enough to throw the human rights ideology overboard, restore secularism in society and fight Islamists? The problem is that they do not even seem to understand the problem. What Peggy Noonan, of the Wall Street Journal, wroteabout Angela Merkel can apply to all leaders of European countries:

“Ms. Merkel had put the entire burden of a huge cultural change not on herself and those like her but on regular people who live closer to the edge, who do not have the resources to meet the burden, who have no particular protection or money or connections. Ms. Merkel, her cabinet and government, the media and cultural apparatus that lauded her decision were not in the least affected by it and likely never would be.

Nothing in their lives will get worse. The challenge of integrating different cultures, negotiating daily tensions, dealing with crime and extremism and fearfulness on the street — that was put on those with comparatively little, whom I’ve called the unprotected. They were left to struggle, not gradually and over the years but suddenly and in an air of ongoing crisis that shows no signs of ending — because nobody cares about them enough to stop it.

The powerful show no particular sign of worrying about any of this. When the working and middle class pushed back in shocked indignation, the people on top called them “xenophobic,” “narrow-minded,” “racist.” The detached, who made the decisions and bore none of the costs, got to be called “humanist,” “compassionate,” and “hero of human rights.” 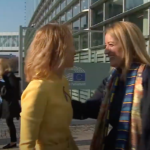