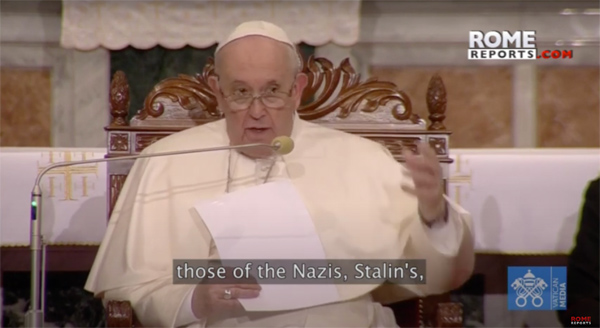 En historie fra The Tablet – Pope likens treatment of migrants to those imprisoned in Nazi or Soviet camps.

“Speaking during a meeting with migrants in Cyprus, Francis said he had a responsibility to highlight the suffering of refugees, with thousands of them held in camps in North Africa and Europe. …

‘We complain when we read the stories of the concentration camps of the last century, those of the Nazis, those of Stalin, we complain when we see this and we say: ‘but why did this happen?’, the Pope said during an ecumenical prayer gathering at the Holy Cross Church, Nicosia. ‘Brothers and sisters: it is happening today, in the neighbouring shores! Places of slavery.’

“The first major fortification of Vatican City was completed in 852. Following an attack by Saracen raiders in 846, Pope Leo IV ordered the construction of a wall around the Leonine City… The 39-foot-tall Leonine Wall, as it became known, stretched for a little under two miles as it encircled Vatican Hill. It was the first time the area had been completely enclosed. Once the Muslim threat had passed, many of the city gates were opened.” (Atlas Obscura)