The Archbishop of Canterbury, Justin Welby, was interviewed recently about the Paris attacks and asked about his reaction. “Like everyone else – first shock and horror and then a profound sadness…” he replied. “Saturday morning, I was out and as I was walking I was praying and saying: ‘God, why — why is this happening?'” 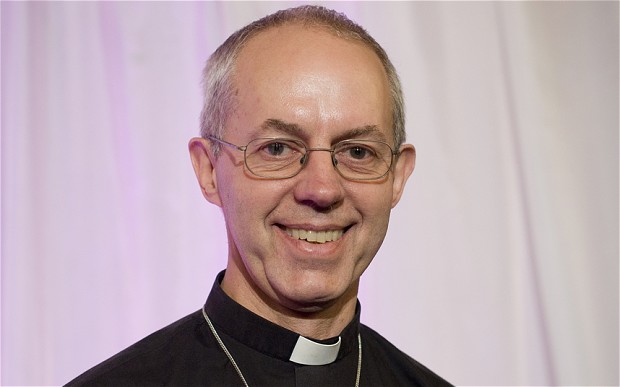 Welby is the principal head of the Anglican Church and the symbolic head of the Anglican Communion, which stands at around 85 million members worldwide and is the third largest communion in the world — after the Roman Catholic Church and the Eastern Orthodox Church. This is a man with an extremely high public profile, and millions of Christians looking to him for spiritual guidance.

But why is a man who is the symbolic head of 85 million Christians worldwide expressing shock at yet another terrorist attack perpetrated by the Islamic State? Had the Archbishop of Canterbury paid more than just fleeting attention to his fellow Christians in Iraq and Syria, he would know that the Islamic State has been slaughtering Christians in the Middle East since 2006. Between 2004 and 2006, before the Islamic State evolved out of Al Qaeda in Iraq, it hardly showed less zeal to root out Christianity even then.

The Archbishop had eleven years to get used to the idea of people being made homeless, exiled, tortured, raped, enslaved, beheaded and murdered for not being Muslims. How much more time did he need?

The Archbishop of Canterbury had more wisdom to offer in the interview. “The perversion of faith is one of the most desperate aspects of our world today,” he said, explaining that Islamic State terrorists have distorted their faith to the extent that they believe they are glorifying their God. But it is unclear how he is as qualified an expert in Islam as Islamic State “Caliph ” Abu Bakr al Baghdadi, who possesses a PhD in Islamic Studies from the University of Baghdad.

Christians, Yazidis and persecuted Muslims in the Middle East can probably point to aspects of the world more desperate than “the perversion of faith,” but then again, the Archbishop does not seem too preoccupied with the situation on the ground.

“The reality is that the Islamic State is Islamic. Very Islamic. Yes, it has attracted psychopaths and adventure seekers, drawn largely from the disaffected populations of the Middle East and Europe. But the religion preached by its most ardent followers derives from coherent and even learned interpretations of Islam.

“Virtually every major decision and law promulgated by the Islamic State adheres to what it calls, in its press and pronouncements, and on its billboards, license plates, stationery, and coins, “the Prophetic methodology,” which means following the prophecy and example of Muhammad, in punctilious detail. Muslims can reject the Islamic State; nearly all do. But pretending that it isn’t actually a religious, millenarian group, with theology that must be understood to be combatted, has already led the United States to underestimate it and back foolish schemes to counter it.”

The West nevertheless continues to pretend that the Islamic State has nothing to do with Islam, and the Archbishop of Canterbury is apparently no different. It is noteworthy, however, that the Archbishop has no misgivings when it comes to Christians. “I cannot say that Christians who resort to violence are not Christians.,” he said to the Muslim Council of Wales two months ago. “At Srebrenica the perpetrators claimed Christian faith. I cannot deny their purported Christianity, but must acknowledge that event as yet another in the long history of Christian violence, and I must repudiate that what they did was in any way following the life and teaching of Jesus.”

During a debate in the House of Lords earlier this year, he also had no qualms in stating that “the church’s sporadic record of compelling obedience to its teachings through violence and coercion is a cause for humility and shame.”

Just as mind-boggling is the refusal of Pope Francis I to speak the name of the perpetrators. In August 2014, when the Islamic State conquered the northern Iraqi city of Sinjar and began brutally to round up and murder Yazidis, and up to 100,000 Christians fled for their lives, Pope Francis could not make himself utter the name of the Islamic State. In his traditional Sunday blessing, he said the news from Iraq had left him “in dismay and disbelief.” As if every atrocity had happened for the first time! Christian Iraqis had at that point been persecuted by Al Qaeda in Iraq and the Islamic State for a full decade. Without referring by name to the Islamic State, and speaking as if some invisible force of nature were at play, the pope deplored “thousands of people, including many Christians, driven from their homes in a brutal manner; children dying of thirst and hunger in their flight; women kidnapped; people massacred; violence of every kind.”

A year later, in July 2015, he called the onslaught on Christians in the Middle East “a form of genocide,” but still without mentioning who exactly was committing it.

It is tragic that the Church has done so little to help its flock in the Middle East. Where, during the past decade, have the Archbishop of Canterbury and his colleagues from the Roman Catholic Church and Eastern Orthodox Church been? Where now is their vocal and public outrage at the near extinction of this ancient Christian culture? Where are their forceful appeals to political leaders and military decision-makers to intervene on behalf of their suffering brethren?

The Pope, however, did find time last May to write a 180-page encyclical about climate change, and he has spoken passionately about the bizarre concept of the “rights of the environment.” In front of the UN and a joint session of the U.S. Congress, he again spoke of the persecution of Christians, as if it were a metaphysical event:

“He expressed deep concern for the persecution of Christians in the Middle East, where they and other religious groups, have been ‘forced to witness the destruction of their places of worship, their cultural and religious heritage’ and been forced to flee or face death or enslavement.”

Christians in the Middle East are suffering and dying, and the world hardly pays attention. The post-Christian West evidently has no moment of charity for the plight of people with whom it might feel at least a slight solidarity. But in 2016, Europe will be receiving another three million migrants, according to the European Union. So far, most of those who have arrived are Muslims, and there is little reason to expect that those who will arrive next year will be persecuted Christians. Most of the refugees come from refugee camps near Syria; Christians stay away from the refugee camps because they experience persecution in them too. It is no different with the Syrian refugees coming to the US.

The Christians in the Middle East are thus still left fending for themselves.