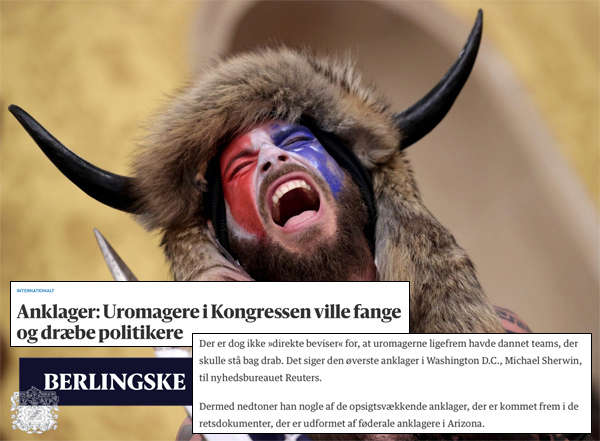 “Federal prosecutors who initially said there was ’strong evidence’ the pro-Trump mob that stormed the U.S. Capitol last week aimed to ‘capture and assassinate elected officials’ backed away from the allegation after the head of the investigation cautioned Friday that the probe is still in its early stages and there was no ‘direct evidence’ of such intentions.

The accusation came in a court filing by prosecutors late Thursday in Phoenix in the case against Jacob Chansley, the Arizona man who took part in the insurrection while sporting face paint, no shirt and a furry hat with horns.

‘Strong evidence, including Chansley’s own words and actions at the Capitol, supports that the intent of the Capitol rioters was to capture and assassinate elected officials in the United States Government,’ a prosecutor wrote in a memo urging the judge to keep Chansley behind bars. But at a hearing for Chansley later in the day in Phoenix, another prosecutor, Todd Allison, struck the line from the memo.

Allison said the statement may very well end up being appropriate at Chansley’s trial, but said prosecutors didn’t want to mislead the court…

Earlier on Friday, Michael Sherwin, acting U.S. attorney for the District of Columbia, backed away from the assassination claims, saying they have ‘no direct evidence at this point of kill, capture teams.’

… Chansley’s attorney, Gerald Williams, said he hasn’t seen any images of his client engaging in dangerous conduct while in the Capitol. ‘He was merely there acting as a protester,’ Williams said, pointing out that his client has no prior criminal history…

The Air Force officer, Col. Larry Rendall Brock, Jr., was arrested Sunday in Texas after being photographed on the Senate floor during the deadly riot wearing a helmet and heavy vest and carrying plastic zip-tie handcuffs.

Brock’s attorney, Brook Antonio II, noted that he has only been charged with misdemeanors. Antonio said there was no direct evidence of Brock breaking doors or windows to get into the Capitol, or doing anything violent once he was inside.”