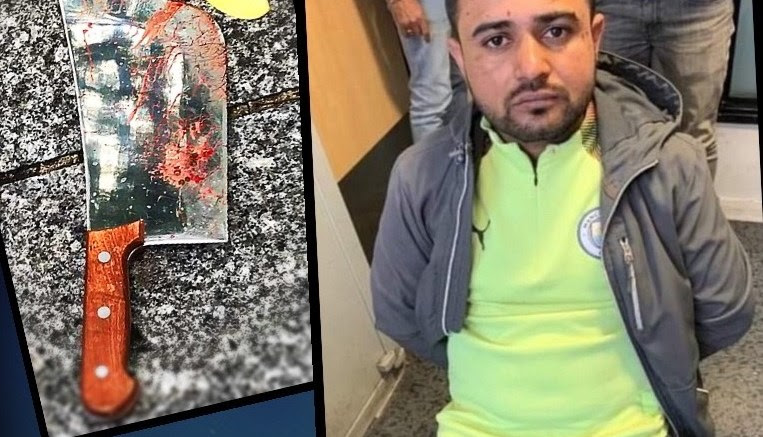 On September 25, in Paris, two people were stabbed and seriously wounded outside the former offices of Charlie Hebdo, where 12 of the satirical magazine’s editors and cartoonists were murdered in 2015. Pictured: Firefighters and paramedics evacuate a wounded victim from the site of the attack.

On September 25, in Paris, two people were stabbed and seriously wounded outside the former offices of Charlie Hebdo, where 12 of the satirical magazine’s editors and cartoonists were murdered by extremist Muslims in 2015. The suspect, in police custody, is being investigated for terrorism.

The accused murderers in the 2015 attacks are currently on trial in Paris. 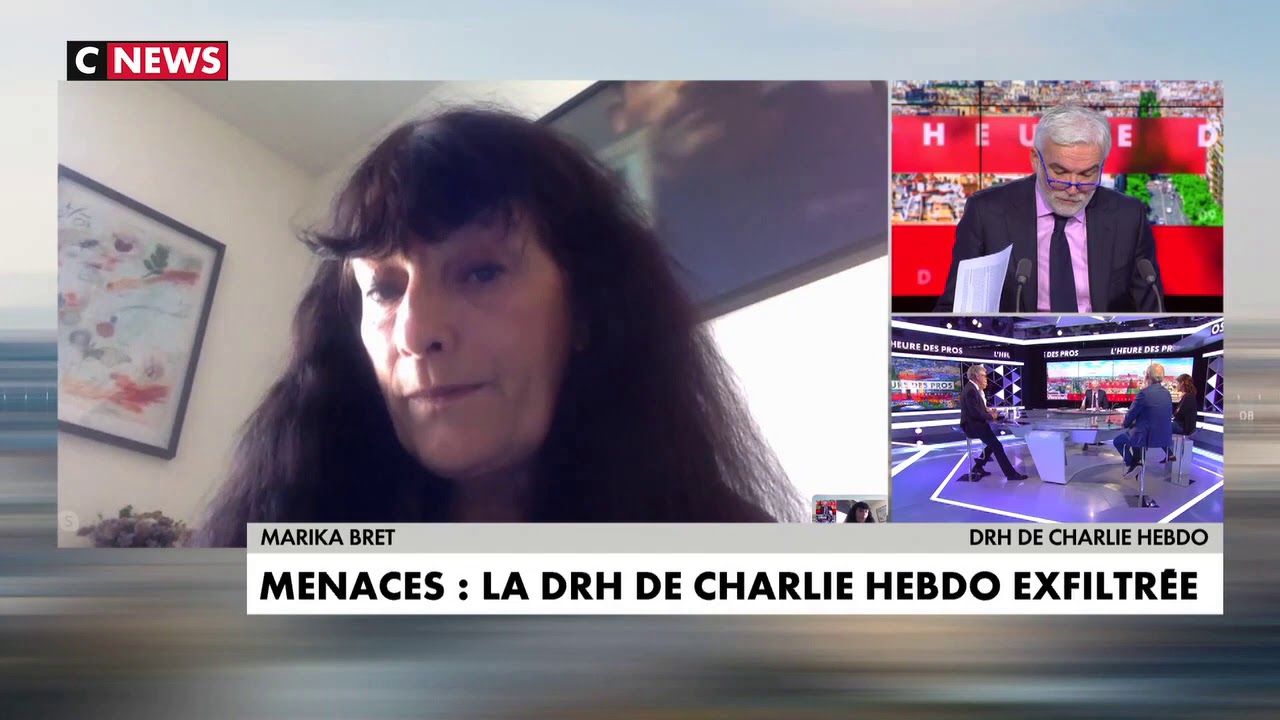 Shortly before the knifing attack, on September 22, Charlie Hebdo‘s director of human resources, Marika Bret, did not come home. In fact, she no longer has a home. She was evicted after serious and concrete death threats from extremist Muslims. She decided to make her “exfiltration” public for French intelligence to alert the public to the threat of extremism in France.

“I have lived under police protection for almost five years”, she told the weekly Le Point.

“My security agents received specific and detailed threats. I had ten minutes to pack and leave the house. Ten minutes to give up a part of one’s life is a bit short and it was very violent. I will not go home. I am losing my home to outbursts of hatred, the hatred that always begins with the threat of instilling fear. We know how it can end”.

Bret also claimed that the French Left abandoned the “battle for secularism“.

From the start of the trial of the men accused of committing the murders at Charlie Hebdo in 2015 — and especially since the renewed publication of Mohammed cartoons — Charlie Hebdo has received threats of all kinds — including from al Qaeda. Security today at the satirical magazine is massive. “The address of our headquarters is secret, there are security gates everywhere, armored doors and windows, armed security agents, we can hardly get anyone in”, Bret said.

Bret has become another example of the clandestine nature of freedom of expression in France, the country of Voltaire. The first was Robert Redeker, a professor of philosophy. On September 17, 2006, he arose early to write an articlefor Le Figaro on Europe’s grappling with Islam. Three days later, he was in a safe house and on the run.

Last January, Mila O., a 16-year-old French girl, made insulting comments about Islam during a livestream on Instagram.

“During her livestream, a Muslim boy asked her out in the comments, but she turned him down because she is gay. He responded by accusing her of racism and calling her a ‘dirty lesbian’. In an angry follow-up video, streamed immediately after she was insulted, Mila responded by saying that she ‘hates religion'”.

Mila continued, saying among other things:

After her school’s address was posted on social media, she was forced to leave and transfer to a different school, this time kept secret.

The journalist Éric Zemmour was attacked several times outside his house; the French-Moroccan journalist Zineb el Rhazoui also found the address of her home published on social media.

Meanwhile, to his credit, French President Emmanuel Macron has been defendingCharlie Hebdo‘s right to freedom of expression. Blasphemy, he said, “is no crime.”

“The law is clear: we have the right to blaspheme, to criticize, to caricature religions. The republican order is not a moral order… what is outlawed is to incite hatred and attack dignity.”

A 2007 legal case ruled that “In France it is possible to insult a religion, its figures and its symbols … however, insulting those who follow a religion is outlawed.”

The courageous words of the French authorities, however, seem harmless, pale and dull, compared to the strength of extremist violence and intimidation.

Islamic fundamentalism has already managed to displace not only thousands of persecuted Christians — such as Asia Bibi, forced to flee for her life from Pakistan to Canada after she was acquitted of committing blasphemy. This brand of extremism has also managed to transform many European citizens into prisoners, people hiding in their own countries, sentenced to death and forced to live in houses unknown even to their friends and families. And we got used to it!

On the day of Iran’s death sentence against Salman Rushdie for his novel, The Satanic Verses, he and his wife, Marianne Wiggins, were taken from their home in North London by the British secret service, to the first of more than fifty “safe houses” in which the writer lived for the next ten years.

The Dutch parliamentarian Geert Wilders — whose name, as the next to be murdered, was found on a sheet of paper knifed into the murdered filmmaker, Theo van Gogh — has been living in safe houses since 2004. “I am in jail,” he says, “and they are walking around free.”

Ten years ago, a Seattle Weekly reporter, Molly Norris, in solidarity with the endangered makers of the television cartoon “South Park,” also drew a caricature of Mohammed. The last newspaper article that talked about her stated:

“You may have noticed that the Molly Norris strip is not included in this week’s issue. That’s because there is no more Molly… on the advice of FBI security specialists, she will be moving and changing her name…”

The Danish newspaper Jyllands Posten, which first printed cartoons of Mohammed in 2005, gave up. The paper declinedto republish the caricatures of the Prophet of Islam when Charlie Hebdo printed them again on its front page. The editor who published the cartoons at Jyllands Posten, Flemming Rose, is still escorted by bodyguards. “I really admire Charlie‘s courage,” he said.

“Heroes who have not succumbed to threats or violence. Unfortunately, they received limited support. No publication in France or Europe behaves like Charlie. That is why I believe that in Europe there is an unwritten law against blasphemy. I am not criticizing the journalists and editors who make this choice. We cannot blame people who, unlike Charlie, do not put their lives in danger. But let us not be fooled: this lack of courage to follow in Charlie‘s footsteps comes at a price, we are losing freedom of speech and an insidious form of self-censorship is gaining ground”.

“We will not publish them anymore. I confirmed this editorial line when I arrived and received a lot of applause. I may look like a coward, but we cannot do it”.

The names of Danish cartoonists appeared on the same “hit list” that Al Qaeda published with the name of Charlie Hebdo’s editor-in chief, Stéphane Charbonnier, murdered in the 2015 massacre. The Danish cartoonist Kurt Westergaard is alive only because during a terror assault on his home, he hid.

Today Jyllands Posten‘s headquarters has bulletproof windows, metal bars and slabs, barbed wire and video cameras. It sits opposite the port of Aarhus, the second largest city in Denmark, and is under surveillance day and night. Each automatic door, each elevator, requires a badge and a code. You enter it as if it were a bank vault. One door opens and after it closes, the next door opens. The journalists who work there enter one at a time. “To put it simply, freedom of speech is in bad shape around the world. Including in Denmark, France and throughout the West,” Rose said, “These are troubled times; people prefer order and security to freedom.”

If all of us do not defend our freedoms, soon we will not have them anymore.