The Iranian-backed terrorist group Hezbollah has long functioned as a state-within-a-state in Lebanon and its leader, Hassan Nasrallah, is the de facto ruler of the country. Now that he is having trouble paying salaries to his terrorists, Nasrallah hopes that the US will rescue Lebanon (and Hezbollah) from collapse. Pictured: Lebanese supporters of Hezbollah, carrying the flag of the group and a portrait of Nasrallah, at an anti-American demonstration near the US Embassy in Awkar, northeast of Beirut, on July 10, 2020. (Photo by Joseph Eid/AFP via Getty Images)

Has Hezbollah Secretary-General Hassan Nasrallah changed his mind about the US, which he always considered a great enemy of the Arabs and Muslims? Not likely. More likely is that he is trying to dupe the Americans into giving Lebanon money to prevent the collapse of his Iranian-backed terrorist group.

Dominated by heavily-armed Hezbollah, Lebanon is currently facing the worst economic crisis in its history. The crisis is seen as the biggest threat to stability since the 1975-90 civil war in Lebanon. The World Bank warned last November that if conditions worsened, the proportion of Lebanese living in poverty could rise to 50%. Since then, the economy has been further hit by the restrictions imposed to curb the spread of the coronavirus pandemic, so the crisis has only deepened.

As the country’s currency collapsed to an all-time low against the US dollar, thousands of Lebanese have been protesting by blocking roads with burning tires and setting fire to banks.

This mess, which has resulted in an increase in the crime rate, was made by a corrosive confluence of government malpractice, economic instability and external interference. In the first four months of 2020, murders in Lebanon doubled compared to the same period last year. Burglaries increased by 20% and car thefts by nearly 50%.

Many Lebanese hold Hezbollah responsible for the crisis, mainly because of its wars with Israel and its support for Iran in conflicts with Sunni-led Gulf states.

Until recently, Nasrallah referred to the US as the “Great Satan.” Earlier this year, Nasrallah’s Iranian-backed terrorist group sent a warning to the US:

“We warn the Great Satan, the bloodthirsty and arrogant regime of the US, that any new wicked act of further aggression (against Iran) will bring about more painful and crushing responses.”

In another statement, in January, Nasrallah said:

“America, the Great Satan, is responsible for Israel and all its crimes against the Palestinian people. America built ISIS (Islamic State terrorist group) to destroy our countries, our culture, history, and our future. We must never forget this, that America is our true enemy.”

The “Great Satan” has been an integral part of Nasrallah’s fiery anti-Israel and anti-American speeches for several years.

On July 7, however, Nasrallah, who regularly encouraged his followers to chant “Death to America, death to Israel,” surprised many Arabs and Muslims when he seemed to adopt a conciliatory tone toward the US.

“Although it is our enemy, we won’t stop America from helping Lebanon solve its economic crisis,” Nasrallah said in a speech.

“I would like to make some corrections; with regards to turning eastward, I was clear in my last speech that this did not mean turning our back on the West. We can take help from all countries, except Israel. Even the US, which is an enemy, can help us. Any country on earth, with the exception of the usurper entity [Israel], which can help us in any way — we are completely open to this. Some have accused us of trying to change Lebanon’s economic structure by turning to China — making it communist or socialist. This is not true. We must open and explore all possible routes now for staving off Lebanon’s collapse.”

Nasrallah went on to urge the Lebanese people to engage in an “agricultural, manufacturing jihad resistance.”

“Today, we are in the battle of agriculture and manufacturing, and we will commit ourselves to this wholeheartedly. We must all become farmers and manufacturers. Wherever we have potential arable land, even a front yard, even balconies and rooftops, we are going to plant.”

Nasrallah’s talk about his country’s readiness to accept aid from the US has raised eyebrows in Lebanon and other Arab and Islamic states, where cynics wondered why the terrorist leader was suddenly prepared to deal with the “Great Satan.”

“To Hassan Nasrallah, whatever you say and do, nothing will change in Lebanon before surrendering your weapons and bringing leaders of your group to trial.”

Fahim al-Hamid, a Saudi writer, said that Nasrallah’s statement “reflects the severe financial crisis that the terrorist Hezbollah is experiencing,” particularly regarding paying the terrorists it sends to Syria to protect Bashar Assad’s “bloody regime.”

Al-Hamid pointed out that Hezbollah’s financial crisis is the result of US sanctions on its patrons in Iran, which had been supporting the terrorist group annually with about $700 million from oil revenues, as well as the US war on the money laundering and drug trafficking operated by Hezbollah’s international networks. “According to reliable sources, Nasrallah ordered a 60% reduction of the salaries of his fighters,” he revealed. “Hezbollah also stopped recruiting new members as a result of the financial crisis. Now he is humiliating himself by begging for help from the US, which he used to consider the ‘Great Satan.'”

For several weeks now, a hashtag titled “Nasrallah has ruined the country” has been trending on Twitter, with many Lebanese and Iraqis accusing the Hezbollah leader of destroying their countries. The Iraqis are accusing Hezbollah of meddling in their internal affairs by establishing Iranian-backed terrorist cells in Iraq. The Lebanese, meanwhile, are accusing Nasrallah of ruining their country by dragging it into wars with Israel, destroying Lebanon’s economy and smuggling flour and fuel to neighboring Syria.

“Lebanon cannot breathe — Hezbollah and Amal militias in the streets of Beirut are claiming to restore peace after their thugs destroyed and looted the city,” saidanother social media user called Joyce. (Amal is a Lebanese political and military party associated with Lebanon’s Shia community.)

Some Lebanese mocked Nasrallah’s call for waging “agricultural and manufacturing resistance” and noted that the Lebanese Ministry of Agriculture has been under the control of Hezbollah for the past 15 years.

Others pointed out that Hezbollah controls Beirut Airport and the Port of Beirut, occupies private and public land illegally, constantly threatens the Lebanese population; runs a global smuggling ring and counterfeit money operation; manufactures [illicit] drugs of all sorts; has rockets in civilian areas; pays no taxes; gets free electricity while others pay; controls gangs that loot and steal; provides protection for corrupt Lebanese politicians; is killing civilians in Syria and Iraq; and brainwashes children from the age of six.

“Nasrallah has taken Lebanon hostage and accused the US of Lebanon’s economic collapse,” says a video clip posted on social media platforms. “Hezbollah is a major partner of the network that looted the Lebanese treasury and banks. Hezbollah is a terrorist organization running an entire country.”

Addressing Nasrallah, another Lebanese politician, Fares Soueid, said: “You give us nothing but sedition and backwardness.”

It is good to see that many Lebanese now realize that Hezbollah and its masters in Tehran have brought nothing but disaster and destruction to their country. Hezbollah (Arabic for “Party of God”) has long been functioning as a state-within-a-state in Lebanon and its leader, Nasrallah, is the de facto ruler of the country.

Now that he is having trouble paying salaries to his terrorists, Nasrallah is hoping that the US will step in and rescue Lebanon (and Hezbollah) from collapse. Arabs and Muslims are perfectly aware of Nasrallah’s desperate attempt to drag the US into propping up his country and organization. Accordingly, they now mock his damning of the US as the “Great Satan” by describing Hezbollah as the “Party of Satan.”

Khaled Abu Toameh, an award-winning journalist based in Jerusalem, is a Shillman Journalism Fellow at Gatestone Institute. 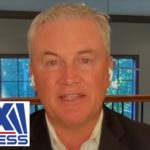