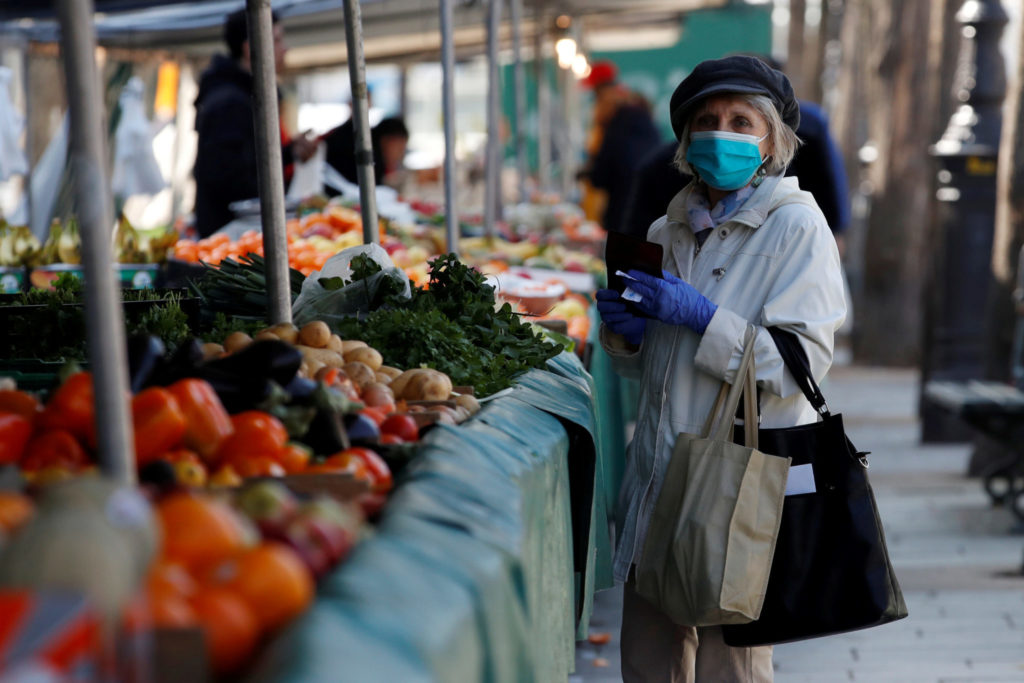 A woman, wearing a protective face mask, shops for fruits and vegetables at the Bastille Market in Paris as a lockdown is imposed to slow the rate of the coronavirus disease (COVID-19) in France, March 19, 2020. Photo: Gonzalo Fuentes/Reuters/Scanpix

As the coronavirus unleashes economic shockwaves across Europe, the European single currency, the most visible symbol of European unification, is facing collapse.

The eurozone — a monetary union of 19 of the 27 Member States of the European Union that have adopted the euro as their common currency — is being buffeted not only by the prospect of a deep and long-lasting recession. Northern and Southern European countries are also feuding over possible financial support for Italy and Spain, the EU’s third- and fourth-largest economies, which have been especially hard hit by the coronavirus.

On March 13, European Central Bank (ECB) President Christine Lagarde dismissed calls by Italy for financial assistance to help it cope with the pandemic. After her comments rattled financial markets, Lagarde quickly reversed course and saidthat the ECB was “fully committed to avoid any fragmentation in a difficult moment for the euro area.” Italian President Sergio Mattarella replied that Italy had a right to expect solidarity from beyond its borders rather than obstacles.

On March 18, the ECB announced that, in an effort to calm sovereign debt markets, it would spend €750 billion ($810 billion) to purchase bonds issued by national governments. Lagarde tweeted: “Extraordinary times require extraordinary action. There are no limits to our commitment to the euro.” Larry Elliott, Economics Editor of the Guardian newspaper, wrote that the ECB’s announcement was evidence that, without a massive support package, the eurozone was in danger of collapse:

“The situation is immensely more dangerous — both economically and politically — than it was when spiraling Italian and Spanish bond yields prompted Mario Draghi’s [President of the European Central Bank between 2011 and 2019] “whatever it takes speech” in 2012. With people dying in their thousands, borders closing and activity collapsing, the entire European project is at risk.”

On March 26, EU leaders, during a virtual summit held by video conference, were unable to agree on an economic response to the coronavirus. A day earlier, nine eurozone countries — Belgium, France, Greece, Ireland, Italy, Luxembourg, Portugal, Slovenia and Spain — called for a common debt instrument, called “coronabonds,” to mitigate the damage caused by the coronavirus crisis. “We are all facing a symmetric external shock, for which no country bears responsibility, but whose negative consequences are endured by all,” they said in a letter.

Austria, Finland, Germany and the Netherlands, dubbed the eurozone’s “frugal four,” rejected the idea of issuing joint debt to finance economic recovery in Southern Europe. Dutch Prime Minister Mark Rutte said that issuing joint debt would be “crossing the Rubicon” because it would turn the eurozone into a “transfer union” in a way that was not foreseen by the Maastricht Treaty, which established the European Union and laid the foundation for the single currency. “I cannot foresee any circumstance under which we will change our position,” he said.

Dutch Finance Minister Wopke Hoekstra, in a letter to parliament, warned that coronabonds would introduce the threat of “moral hazard” by disincentivizing economic reform in debt-ridden Southern Europe. He also called on the European Commission, the EU’s administrative arm, to investigate why countries such as Italy and Spain have not made adequate economic reforms since the 2008 financial crisis.

A European diplomat quoted by the Dutch newspaper De Volkskrant describedHoekstra’s comments as a “serious insult” to Southern Europe. Another diplomat said that the comments were a “Dutch middle finger to the south.”

Southern European countries have the option of tapping funds from the European Stability Mechanism (ESM), the eurozone’s bailout fund, which lends money under strict conditions. Those countries are reluctant to use the ESM becausethey would be saddled with long term debt that would be hard to repay, and because the conditions would impinge on national sovereignty.

“Northern offers of loans with strings attached strike the south as punitive and inadequate. Southern clamor to issue joint bonds sound to the north like a demand to use its credit card….

“The specter of a divided eurozone remains. Unless the economic shock of lockdowns is quickly overcome, Italy and Spain are in danger of emerging from the coronavirus crisis as poorer countries. A renewed depression in Southern Europe would also be bad news for northern nations, whose industries and banks profit from the overall health of the region’s economy.”

In other words, if the coronavirus crisis eventually causes Italy to default on its debt, the reverberations will be felt across Europe — and the globe. Italy, with a GDP of nearly $2 trillion, is said to be “too big to fail, too big to bail.” Desmond Lachlan, a Resident Fellow at the American Enterprise Institute, noted:

“Unlike Greece, Italy is too big an economy to fail for the euro to survive and too big and costly an economy for its European partners to save….

“In gauging Italy’s systemic importance to the global economy, one should bear in mind that its economy is approximately 10 times the size of that of Greece and that it is the eurozone’s third-largest economy.

“Equally important is the fact that after the United States and Japan, Italy has the world’s third-largest sovereign debt market with more than $2.5 trillion in outstanding government debt.

“It is difficult to conceive of a scenario where an Italian debt default would not trigger a European banking crisis. Were that indeed to occur, it must be expected to have global economic and financial market ramifications.”

The Associate Editor of the UK-based newspaper Independent, Sean O’Grady, wrote that the coronavirus crisis could catapult Italy into bankruptcy:

“Italy’s crisis is Europe’s. When Italy catches a cold, Europe will catch pneumonia. The euro cannot permit a major economy (Italy is the eurozone’s third-largest) to collapse in a disorderly mess.”

In Spain, which recently overtook Italy as the epicenter of the coronavirus in Europe, Prime Minister Pedro Sánchez committed €200 billion ($215 billion) — 20% of the country’s GDP — to alleviate the economic and social consequences of the pandemic. When asked how he would pay for that amount of spending, Sánchez replied that he was counting on financial help from “Europe.”

Meanwhile, the coronavirus crisis is wreaking havoc across the eurozone, which suffered an unprecedented collapse in business activity in March 2020, accordingto IHS Markit, a London-based information provider. “Business sentiment about the year ahead has plunged to the gloomiest on record, suggesting policymakers’ efforts to date have failed to brighten the darkening picture,” it wrote. A survey by McKinsey & Company forecast that eurozone GDP will fall by 10.6% in 2020, and will not return to pre-crisis levels until the end of 2024.

On April 6, French Finance Minister Bruno Le Maire warned that France is likely to see its deepest recession since the end of World War II this year because of the coronavirus crisis. “The worst growth figure in France since 1945 was in 2009, after the great financial crisis of 2008: -2.2%. We will probably be far beyond -2.2% this year,” Le Maire told the Senate Economic Affairs Committee. “This shows the extent of the economic shock we are facing,” he added.

France, the eurozone’s second-largest economy after Germany, imposed a nationwide stay-at-home order since March 17. The lockdown will last until at least April 15. One month of confinement would cost France around 3 points of GDP over a year, and two months of confinement around 6 points, according to French Statistics Agency INSEE.

French President Emmanuel Macron warned his fellow EU leaders that the coronavirus outbreak risked undoing the bloc’s central pillars if they failed to show solidarity in this crisis. “What’s at stake is the survival of the European project,” he said.

Achim Truger, a member of the German Council of Economic Experts, said that he believes that coronabonds are necessary to prevent a collapse of the euro:

“All countries in Europe are being hit by the epidemic — Italy and Spain particularly hard. All countries, including Germany, must therefore be able to make the necessary health expenditures and take measures to bridge the economic crisis. This is only possible through additional government debt, and this must be guaranteed to prevent another euro crisis. If the debt loads of Italy and Spain rise sharply, they will be pushed into budget cuts, thus economic, social and political crises, which would ultimately lead to a sovereign debt crisis and a collapse of the euro and the EU. Therefore, there must now be a joint, solidarity-based solution.”

Oliver Hartwich, a German economist and prominent commentator on European affairs who is the Executive Director of the Wellington-based think tank The New Zealand Initiative, summed up the European predicament:

“Today, not a single European country is doing well which means there is limited willingness for European countries to come to each other’s aid. They are busy dealing with their own crises. Just witness how Italy has been left alone with its crisis by Europe and now rather gets its medical support from China….

“An almighty economic earthquake is in the making. In a few weeks or months, several large European economies will require bailout and assistance packages. These will be several times larger than anything Europe has seen. Yet no country, central bank or institution will be eager or even able to provide them. Even the gargantuan sums on the table now will not be enough.

“Incidentally, forget about the International Monetary Fund. It was already stretched when it got involved with Greece last time. It cannot bail out all of Europe when the euro collapses.”