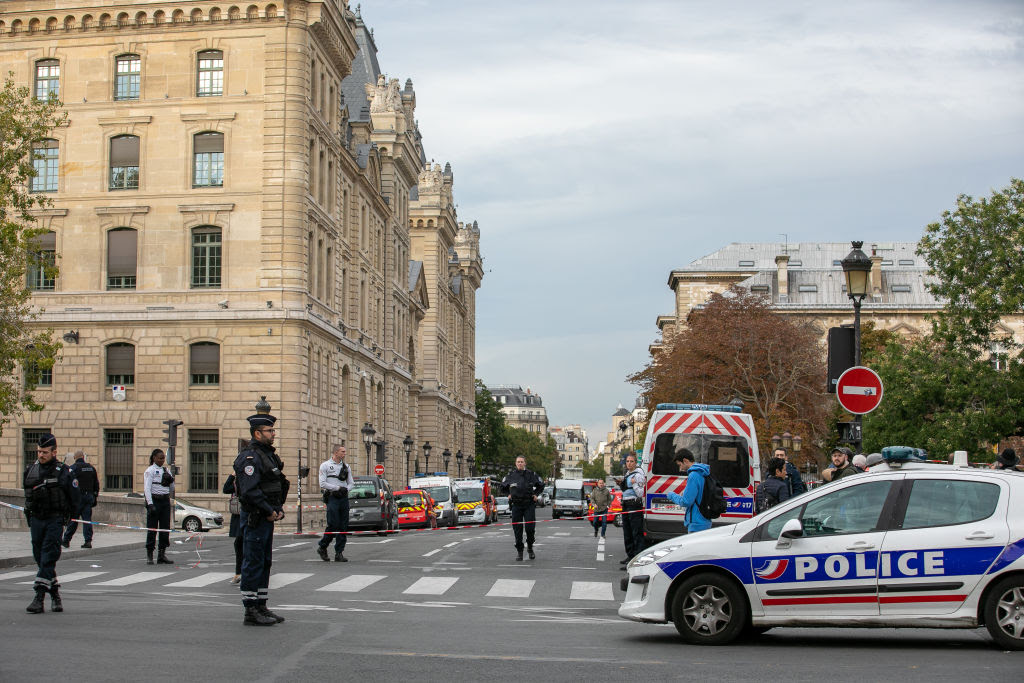 PARIS, FRANCE – OCTOBER 03: Police personnel block the bridge near Paris Police headquarters after four officers were killed in a knife attack on October 3, 2019 in Paris, France. A civilian police worker wielding a knife stabbed and killed four officers at the police headquarters before being shot dead. (Photo by Marc Piasecki/Getty Images)

This time, the terrorist did not use firearms; his victims were not unarmed children, cartoonists or Jews but policemen.

“We have entered a… terrorism made in France… with a mixture of Friday preaching by extremist imams, social networks and the instrumentalization of fragile individuals. It is about creating a new panic in society by targeting iconic … places… The attack is a major turning point in Islamist terrorism.”

The assailant, Mickaël Harpon, born in the French Caribbean island of Martinique, was shot and killed after stabbing four people to death with a ceramic kitchen knife during the lunchtime assault at the Paris police headquarters. Harpon, a civilian IT specialist in the intelligence division holding high-level security clearance, had worked for the police for 16 years. First he killed three men in the intelligence division, then he stabbed two female police employees in a stairwell (one died from her wounds) before he finally was shot and killed in the building’s courtyard.

Harpon was a longtime convert to Islam and a conscientious attendee of his local mosque, where he attended morning and evening prayers. A radical imam who was nearly expelled from France officiated there.

According to the Wall Street Journal:

“A key question is whether Harpon downloaded that data onto the flash drive for his job… or to send it to his extremist contacts that could use it to target the police.”

In 2016, Patrick Calvar, France’s director general of domestic intelligence — pointing to the number of Salafists active in France (15,000 at the time) — declared that “the confrontation is inevitable”. Now one of them struck “the system” from within.

“The attack at the police headquarters can be regarded as the most serious on our soil since November 13, 2015,” says Thibault de Montbrial, president of the Center for Internal Security, a French think tank.

“For four years, France has undergone several attacks. Some had a very high human cost, as in Nice in 2016. But that of the Prefecture is of a different nature: it is the first ‘blue on blue’ attack, where a member of the police force targets his comrades.”

At the heart of the extremist agenda, it seems, lies separation. “How has a multitude of Islamist networks managed to create ideological enclaves inside popular neighborhoods?”, asks the author Bernard Rougier in Les territoires conquis de l’islamisme (“The conquered Territories of Islamism”). The forthcoming book documents the functioning of Islamist networks in several municipalities, such as Aubervilliers, Argenteuil, Tremblay-en-France, and Mantes-la-Jolie.

According to the French journalist Eric Zemmour:

“In the street, veiled women and men wearing jellabas are de facto propaganda, an Islamization of the street, just as the uniforms of an occupying army remind the defeated of their submission. For the bygone triptych of ‘immigration, integration, assimilation’ has been substituted ‘invasion, colonization, occupation.'”

In 2016, an internal police memorandum revealed that between 2012 and 2015, there were many instances in Paris of police officers engaging in radical behavior or acts that concerned their superiors. In one instance, in 2016, a jihadist stabbed a police commander and his partner at their home in Magnanville, west of Paris; and French police investigating a woman for suspected ties to ISIS discovered a USB drive containing the personal details, including the home addresses, of thousands of French police officials. Who provided that information?

The general impression is that France is now overwhelmed with a proliferation of radicalized inhabitants. The terrorist who opened fire on a Christmas market in Strasbourg in 2018 had been on the terrorism watchlist; so were the terrorists who struck the Trébes supermarket and the man who murdered Jewish children at a school in Toulouse. Although the French authorities knew of them, they were unable to stop them.

There seems to be a terrible security breach. The problem in France, however, lies deeper than that. According to a report by the Pew Center, by 2050, 12% to 18% of France’s population will be Muslim. Conversions to Islam are rising. Extremism is becoming such an integral part of the country that, according to the historian Pierre-André Taguieff, for many French citizens, jihadism has become an “attraction“. There are now several villages in the French countryside where converts and fundamentalists retreat to practice a “pure” form of Islam.

Paying homage to the victims of the terror attack at Paris police headquarters, President Emmanuel Macron declared that France must fight the “hydra” of Islamist militancy.

The problem is that France has, for years, been in a state of denial about the proliferation of radical Islam. “In some districts,” said the Algerian author Boualem Sansal, “France is an aspiring Islamic republic.”

Le Monde, France’s most prestigious newspaper, ran an op-ed after the recent attack, charging the country with “Islamophobic McCarthyism.” Harpon, the terrorist who murdered his colleagues at police headquarters, would have agreed: he shared articles calling France “one of the most Islamophobic country in Europe” — so Islamophobic, in fact, that even Ahmed Hilali, the radical imam in touch with the Harpon, had received an order of deportation from France for his extremist ideas, but the order was never implemented.

“How is this possible? How could an Islamist terrorist be so wrapped up in the state apparatus, at the very heart of the police structure that is precisely supposed to fight the Islamist practices, perpetrate the massacre? Dénislamisme endangers the French. It blurs the perception of the threat and disarms the spirits. At a time when mobilization should be maximum, it paralyzes the fight against Islamist infiltration in our democracies. Dénislamisme kills. We will not win the war that radical Islam has declared on us by continuing to walk with our eyes shut”.