Americans are Dying for China in Afghanistan

On April 22, an ISIS terrorist at a voter-registration office in Afghanistan’s capital city of Kabul blew himself up, killing at least 60 innocent people and wounding an additional 100. The following day, the United States condemned the suicide bombing, while repeating America’s policy of counterinsurgency and nation-building in Afghanistan.

“This attack on this polling station reaffirms our commitment to our Afghan partners and reaffirms on why we have to focus on rooting out violent extremism,” Pentagon spokesman US Army Col. Robert Manning said. “When citizens can’t go and register and exercise their democratic right to vote, that’s a problem. They certainly deserve it, and that’s why we are going to stay there to make sure we can work with our Afghan partners to afford them that right.”

In her daily news briefing with reporters, White House Press Secretary Sarah Sanders Huckabee made a similar statementabout the US administration “continuing to move forward” with its current strategy in South Asia.

Yet, while US policy-makers are trying desperately to stabilize Afghanistan, a shift is being orchestrated by China, which stands to gain from what Afghani author Mushtaq Rahim recently referred toas Beijing’s “economic development agenda.”

China, he writes, “has been looking at Afghan affairs with a ‘wait and see’ approach and has gone into hibernation most of the time in debates regarding future of Afghanistan.

“While one can argue that the size and extent of the Chinese economy may not need Afghanistan for its growth and expansion agenda…A fractured or failed Afghanistan will pose significant security threats for China… challenging a major part of Belt and Road Initiative (BRI) i.e. China Pakistan Economic Corridor (CPEC)…

“A stable and strong Afghanistan can be a good regional contributor to the Chinese connectivity and economic integration agenda. Based on an assessment, Afghanistan owns one trillion USD in untapped mineral resources. These resources include a healthy amount of Lithium and Copper reserves which should be enticing for Beijing-based economists as Chinese industry is in great need of the mentioned chemical elements. In addition, Afghanistan has signed a Memorandum of Understanding (MoU) with China to join the CPEC.

“China can be a very acceptable option for Kabul and Taliban at the same time to offer guarantees in the case of potential breakthrough in the formal peace process. In addition, it should also further expand its military support for Afghan security forces… China will have to increase its political engagement at local, regional and global levels in support of a strong Afghanistan in order to help the entire region survive challenges posed by the non-state actors who are exploring the use of Afghanistan as their operational bases.”

The Chinese evidently see their rolein Afghanistan as the “good cop” versus the U.S. role as “bad cop.” Like Pakistan, China seems to view the Taliban as the political opposition, not as a terrorist organization, and has offered itself as an intermediary to negotiate the departure of the U.S. and, thereby, be in a position to reap the economic and geopolitical benefits of Afghanistan as a client state of the China-Pakistan alliance.

In other words, Americans are doing the work that the Chinese will not do, but from which the Chinese can eventually benefit the most.

China’s strategy is evidently to connect Asia through land-based and maritime economic zones. CPEC is an infrastructure project, the backbone of which is a transportation network connecting China to the Pakistani seaports of Gwadar in the Balochistan Province and Karachi in the Sindh province, both located on the Arabian Sea.

Control of Afghanistan via its proxy, Pakistan, will allow China to complete transportation corridors, power grids and oil and gas pipelines throughout Central and South Asia. China can then begin to exploit Afghanistan’s estimated $3 trillion in untapped mineral resources, in addition to Balochistan’s $1 trillion in gold, copper, oil, precious stones, coal, chromite and natural gas.

The Afghanistan War could end “in a whimper” with a political settlement, the main purpose of which would be to provide a graceful exit that politely delays the announcement of a Taliban/Pakistan victory and a defeat for the US and NATO, all choreographed by China, which could then set up shop as the dominant regional power.

The US will have difficulty winning a war in a landlocked country where China’s ally, Pakistan, controls the supply of troops and regulates the operational tempo through its support of the Taliban and the Haqqani network. The US appears to be hoping to stabilize a region,thousands of miles away, containing an endless supply of Islamic extremists fomented and facilitated by Iran, Pakistan and Saudi Arabia. Instead, or at the same time, the US should be learning to leverage instability and preparing to counter Chinese hegemony.

As China attempts to expand, opportunities arise to exploit geopolitical vulnerabilities and to thwart Chinese efforts for regional domination, including traditional nation state conflicts, the Sunni-Shia divide and ethnic nationalism, as well as other means.

An American withdrawal from Afghanistan would not constitute a defeat unless the US is forced into a strategic retreat due to its lack of a plan in place to address the changing regional situation, much of which is dictated by China.

Lawrence Sellin, Ph.D. is a retired US Army Reserve colonel, an IT command and control subject matter expert, trained in Arabic and Kurdish, and a veteran of Afghanistan, northern Iraq and a humanitarian mission to West Africa.lawrence.sellin@gmail.com.

Americans are Dying for China in Afghanistan
by Lawrence Sellin
May 10, 2018 at 5:00 am
https://www.gatestoneinstitute.org/12256/afghanistan-china-us 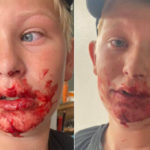