“The fabled German news magazine’s award-winning reporter Claas Relotius, 33, a legend in his time, replaced facts with fantasy. He quoted people he had not interviewed. He described streets and buildings he had seen on Google Earth only. Painted in exquisite detail, the scenes were nothing more than figments of his imagination.

… Why did the system set up to corroborate every fact and assertion, every quote and statistic, fail to expose and stop the fake artist?

Relotius was a most brilliant counterfeiter: His pieces are full of minute detail so specific, so precise, as to appear necessarily authentic. And why doubt a celebrated reporter who describes a small-town street corner as if it were etched into his photographic memory? …

Among Relotius’ most celebrated articles were his pieces on Donald Trump’s America. They paint a picture of the country Europeans love to despise.

‘In This Small Town’ — a 7,300-word story about Fergus Falls, where ‘people pray for Donald Trump on Sundays,’ confirmed what we all ‘know.’ It was a tableau of ‘red-neck’ America — a gun-toting, intolerant, anti-immigrant and irrationally religious nation.

The fact-checking work of two Fergus Falls citizens revealed this to be a fabrication. Not only does Relotius’ starring character, city administrator Andrew Bremseth, not carry a Beretta 9mm to work, he doesn’t even own one. Neither does the town have a sign that reads ‘Mexicans stay out.’ Relotius’ report was about perpetuating ‘an ugly and exaggerated stereotype,’ the residents concluded…“ 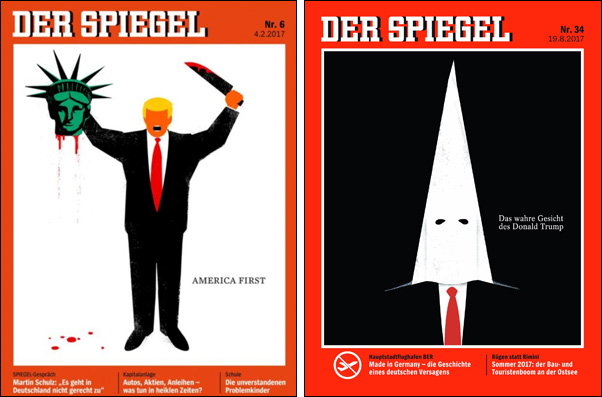 “Relotius has received accolades for his daring quest to live among us for several weeks. And yet, he reported on very little actual truth about Fergus Falls life. In 7,300 words he really only got our town’s population and average annual temperature correct, and a few other basic things, like the names of businesses and public figures, things that a child could figure out in a Google search. The rest is uninhibited fiction… There are so many lies here, that my friend Jake and I had to narrow them down to top 11 most absurd lies (we couldn’t do just 10) for the purpose of this article.”(Medium, 19. december 2018)

“On the evening of Monday, Dec. 3, Relotius, who had worked for DER SPIEGEL for seven years and had been employed as an editor for the past year and a half, was called onto a stage in Berlin. The jury for the 2018 German Reporter Prize was once again of the opinion that he had written the best feature story of the year, this one about a Syrian boy who lived with the belief that he had contributed to the country’s civil war through a graffito he had daubed onto a wall in Daraa. The jurors praised the article for its ‘unparalleled lightness, intimacy and relevance that is never silent regarding the sources on which it is based.’ The truth, however — a truth that nobody could have known at that point in time — is that his sources were anything but clear. Indeed, it is likely that much of it was made up. Inventions. Lies. Quotes, places, scenes, characters: All fake.“ (Der Spiegel, 20. December 2018)

“Although these two most-publicized stories purport to expose how immigrants and minority families suffer in Trump’s America, the fabrications occasionally further a larger anti-American narrative. Relotius invented a phone interview with Colin Kaepernick’s parents. Another fraudulent tale involved a Yemeni prisoner at Guantanamo Bay. Earlier this month, he won Germany’s Reporter of the Year award for a largely fabricated story about a young Syrian boy. Other tainted articles that won or were nominated for awards involved Iraqi children kidnapped by ISIS and Syrian orphans forced into a Turkish sweatshop.” (The Federalist, 20. december 2018)

“Several major features Relotius wrote for Der Spiegel that were also nominated for or won journalism awards are now under scrutiny, according to the magazine. Among them, ‘The Last Witness,’ about an American who allegedly travels to an execution as a witness, ‘Lion Children,’ about two Iraqi children who have been kidnapped and reeducated by the Islamic State, and ‘Number 440,’ a feature about alleged prisoners at the US detention facility in Guantanamo Bay, Cuba.”(CNN, 21. december 2018)