The Ignored Genocide of Christians in Nigeria 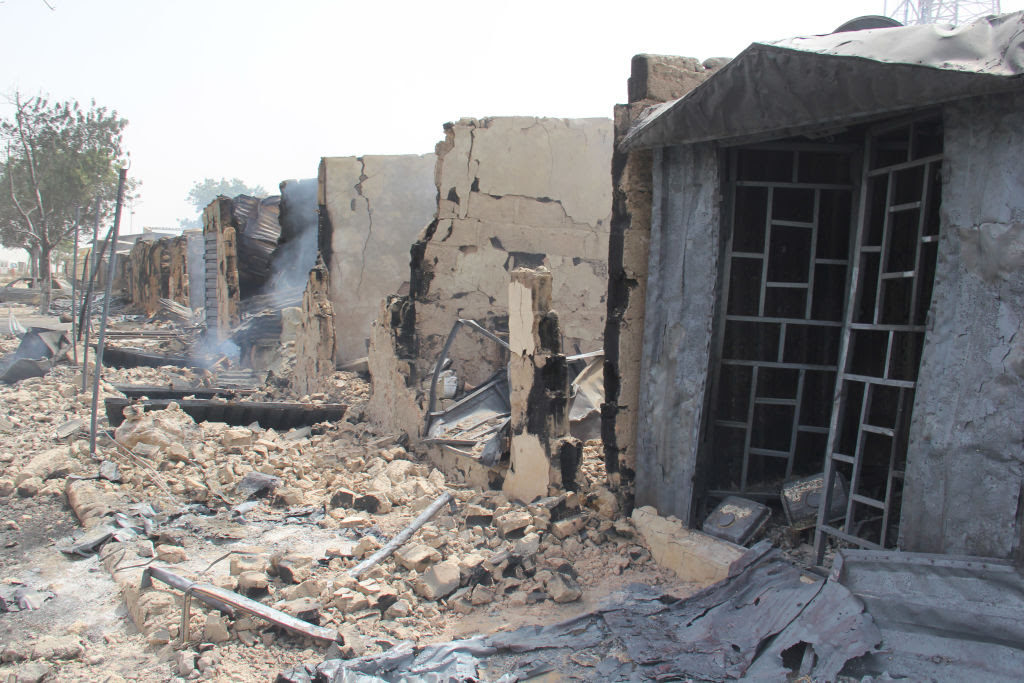 The mass slaughter of Christians in Nigeria, which some international observers have classified as genocide, is reaching unprecedented levels. Pictured: The town of Auno, Nigeria on February 10, 2020, following an attack the previous day in which jihadists murdered at least 30 people and abducted women and children. (Photo by Audu Marte/AFP via Getty Images)

The mass slaughter of Christians in Nigeria, which some international observers have classified as genocide, is reaching unprecedented levels.

According to an August 4 report, at least 171 Christians were slaughtered by Muslim Fulani herdsmen in the space roughly three weeks:

“And these are only those we know of. In reality, the toll is likely to be far higher. Many thousands are also being displaced by the violence from homes and such livelihoods as they had left after covid lockdown brought economic havoc…. Our news desk has been swamped by such stories for many months, yet this relentless and bloody toll of Christian lives is disturbingly absent from wider mainstream media.”

In one of the recent raids, on July 10, Muslim herdsmen massacred 22 Christians — “mostly women and children” — and torched many homes in a farming community. “The Fulani came in and were shooting,” recalled Bilkisu James from her hospital bed. “They killed two of my children [and husband].” They also “hacked another five of Bilkisu’s relatives to death with machetes including a mother and her baby daughter and a mother and her two sons.”

A Muslim neighbor had apparently exposed the Christian family to his invading coreligionists: “Before I was shot,” Bilkisu continued, “I saw the Fulani man who is my neighbour, he even identified me. I surrendered to him on my knees” — to no avail. They shot her in the chest and back and left her for dead, even as she “heardthem light the match and set the house on fire.”

The next day, a neighboring village was raided: “ten women, a baby and an elderly man were burnt to death in a house where they had taken refuge. Another seven villagers were injured and four houses burnt out.” On July 19, people attending a wedding celebration were among at least 32 Christians massacred in Fulani attacks.

In a separate “horrific night attack during a torrential rain storm on 23 July, at least seven Christians died… as militants brutally hacked unarmed men and women and children to death with machetes.” The report adds that “This was the second attack on the village within days, with seven murdered in an attack days earlier on 20 July.”

On July 29, Muslim herdsmen murdered another 14 Christians — 13 of whom belonged to one extended family. Only one member of the family remained alive; his wife, all his children, aunt, uncle, brother, and other relatives were slaughtered.

Listing more atrocities — there are hundreds through the years — is futile in one article. (For a comprehensive look at Christian suffering in Nigeria and other Muslim nations, see Gatestone’s monthly “Persecution of Christians” reports.)

Consider just April 2020. Machete-wielding Muslim herdsmen murdered at least 13 Christians between April 1-2. “[W]e woke up to bury seven people burnt to death… from an overnight attack,” one source said. Those killed “are mostly elderly Christians who were unable to escape as members of the community ran into surrounding bushes during the attack.”

Then, on April 7, the Fulani herdsmen slaughtered a pastor and three members of his congregation, including a 10-year-old boy. The pastor, Matthew Tagwai, who was murdered in his home, is survived by a pregnant wife and two small children.

On April 10, Muslim Fulani herdsmen murdered pastor Stephen Akpor, 55. “Two herdsmen came to a branch of our church, Celestial Church… where they shot him as he was praying and counseling five members in the church,” his colleagues said. “The herdsmen shot the pastor several times and then stabbed him to death.” He is survived by his wife and five children.

On April 13, Muslim Fulani herdsmen decapitated two Christians, in a manner that required them to be “buried without their heads.”

On April 14, Muslim Fulani herdsmen butchered nine Christians, six of whom were children, one a pregnant mother. “They were armed with machetes and AK-47 rifles as they attacked us,” a survivor recalls: “They attacked our village at about 8 p.m., and they were shouting, ‘Allahu Akbar!’ as they shot into our houses.” Thirty-three homes were set ablaze.

On April 16, Muslim Fulani herdsmen killed Sebastine Stephen, a young Christian student. “The Fulani herdsmen were over 50 carrying sophisticated guns and shooting sporadically. After they killed the young man,” a survivor reported, “they then broke into the house of Mr. Jack Nweke and abducted him with his wife, leaving behind their three children.”

On April 19, Muslim Fulani herdsmen killed four Christians. “Thirty-eight houses with 86 rooms were also razed down, while about 87 families are affected,” a source said.

On April 20, “A Christian farmer, Titus Nyitar, was shot to death, and his head was cut off,” an area resident said. Titus was “working on his farm when he was killed by the herdsmen.” Afterwards they “proceeded to the village to burn down houses and kidnapped three villagers.”

On April 22, Muslim Fulani herdsmen killed 12 Christians; earlier, the reportnotes, they kidnapped a couple as they were being married inside their church.

On April 23, the Fulani “killed two people, kidnapped another and burned down a church building that included the pastor’s home in attacks on predominantly Christian areas in north-central Nigeria.”

Aside from some of the most grisly incidents — such as the rape and slaughter of a Christian student sheltering in a church — the so-called mainstream media does not report on the bulk of this persecution. Could journalists be worried that a politically incorrect pattern might emerge in which the attacks would appear more ideologically driven, as opposed to just “crimes”?

“It is as if the lives of Christians no longer matter,” said a Nigerian pastor about the wedding attack that claimed 32 lives.

“It is very disturbing that these daily onslaughts on Christians … have been going on far too long unattended by the Federal and State governments…. there are no sympathy visits to the remnant victims in the communities… There are no steps taken to alleviate their sufferings by providing relief materials to them since they have been made internally displaced persons in their thousands.”

“I strongly believe,” said a survivor of a recent Fulani attack that claimed the life of his sister and four other Christians, “that some of these security personnel who are Muslims are conniving with these armed men to attack our people…. the sad reality is that our people have made representations to the government at both the state and federal levels and nothing has been done.”

“What is the crime of these innocent people against Fulani herdsmen?” another local asked concerning an attack that left a pastor and a 10-year-old child dead.

Their questions are especially relevant in light of recently released statistics: Since 2009, “not less than 32,000 Christians have been butchered to death by the country’s main Jihadists” — with next nothing done about it, said a May report:

“Militant Fulani Herdsmen and Boko Haram … have intensified their anti-Christian violence … with hacking to death in the past four months and half of 2020 of no fewer than 620 defenseless Christians [470 by Fulani herdsmen and 150 by Boko Haram], and wanton burning or destruction of their centers of worship and learning. The atrocities against Christians have gone unchecked and risen to alarming apogee with the country’s security forces and concerned political actors looking the other way or colluding with the Jihadists. Houses burnt or destroyed during the period are in their hundreds; likewise dozens of Christian worship and learning centers.”

The reason formerly simple Fulani herdsmen have, since 2015, managed to kill nearly twice as many Christians as the “professional” terrorists of Boko Haram, according to numerous Christian leaders in Nigeria, is, to quote Nigerian bishop Matthew Ishaya Audu, “because President Buhari is also of the Fulani ethnic group.”

In a January statement, the Christian Association of Nigeria, an umbrella group representing most denominations, further accused “the federal government under President Muhammadu Buhari” of “colluding” with the Islamic terrorists “to exterminate Christians in Nigeria.” The Association asked:

“Since the government and its apologists are claiming the killings have no religious undertones, why are the terrorists and herdsmen targeting the predominantly Christian communities and Christian leaders?”

Some Nigerian leaders go beyond Buhari and blame “the evil called Barack Obama” — in the words of Femi Fani-Kayode, Nigeria’s former Minister of Culture and Tourism. On February 12, the former government official wrote the following on his Facebook account:

“What Obama, John Kerry and Hilary Clinton did to Nigeria by funding and supporting [current president Muhammadu] Buhari in the 2015 presidential election and helping Boko Haram in 2014/2015 was sheer wickedness and the blood of all those killed by the Buhari administration, his Fulani herdsmen and Boko Haram over the last 5 years are on their hands.”

Although President Buhari’s fellow Fulanis have claimed the lion’s share of attacks on Christians since his presidency, Boko Haram — the original scourge of Christians in Nigeria — is still active. Earlier this year, for instance, it released a video of a masked Muslim child holding a pistol behind a bound and kneeling Christian hostage, a 22-year-old biology student who was earlier abducted while traveling to his university. After chanting in Arabic and launching into an anti-Christian diatribe, the Muslim child shot the Christian several times in the back of the head.

Weeks earlier, Islamic gunmen abducted Reverend Lawan Andimi, a pastor and district chairman of the Church of the Brethren in Nigeria. After the terrorists demanded an exorbitant ransom for his release — two million euros, which his church and family simply could not raise — they beheaded the married father-of-nine. Earlier, in a January 5 video that his abductors released, Pastor Lawan had said that he hoped to be reunited with his wife and children; however, “[i]f the opportunity has not been granted, maybe it is the will of God. I want all people close and far, colleagues, to be patient. Don’t cry, don’t worry, but thank God for everything.”

The Nigerian government, Bishop Matthew Hassan Kukah said about the beheading of another 10 Christians earlier this year, is “using the levers of power to secure the supremacy of Islam. The only difference between the government and Boko Haram is that Boko Haram is holding the bomb.”

Raymond Ibrahim, author most recently of Sword and Scimitar: Fourteen Centuries of War between Islam and the West, is a Distinguished Senior Fellow at the Gatestone Institute, a Shillman Fellow at the David Horowitz Freedom Center, and a Judith Rosen Friedman Fellow at the Middle East Forum.

The Ignored Genocide of Christians in Nigeria
by Raymond Ibrahim
August 16, 2020 at 5:00 am