The Ruin of England 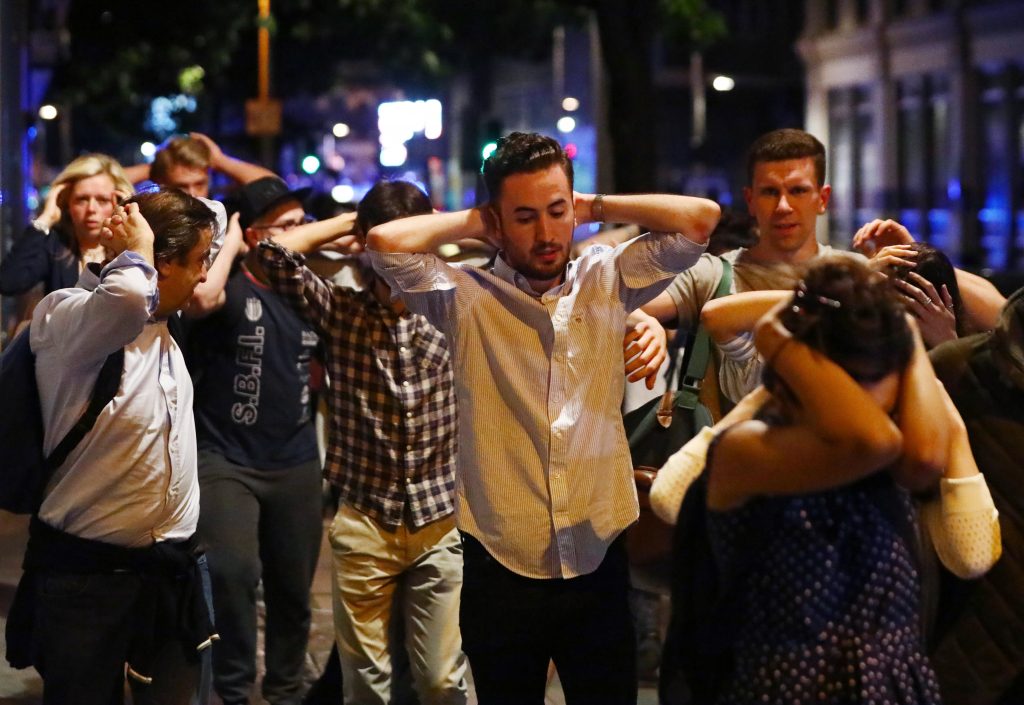 Photo: They are not prisoners of war, but they might look like it. Ordinary pedestrians must raise their arms to leave the area where terrorists committed murder. As if in a war. June 4, 2017. REUTERS/Neil Hall/Scanpix

The groupthink in our public discourse is so pervasive it goes as unnoticed as the air. For example, let’s say a bunch of young girls are blown up at a pop concert. You have to say something about it. But what?

Sir Richard Leese, Leader of Manchester City Council, on what he called the “incident” (seriously) at Manchester Arena:

We will not allow terrorists who seek to sow fear and division to achieve their aims.

Likewise, Amber Rudd, the British Home Secretary, had no doubt about the intent of the attack:

Even on the Continent, Jean-Claude Juncker, President of the European Commission and would-be scourge of Brexit, was admirably on message:

Once again, terrorism has sought to instil fear where there should be joy, to sow division where young people and families should be coming together.

The London press weighed in:

Those who perpetrated this attack hope to sow division.

And the Canadian press:

To state the obvious: Terrorist attacks are meant to terrorize and sow division.

And the American press:

You’d be surprised how easy it is to sow division. But take it from the Scottish press:

Yes, yes, but what do the experts say?

Paris (AFP) – By targeting children at a pop concert in Manchester, the Islamic State group aimed to cause maximum outrage and sow divisions by turning people against Muslims, experts say.

When death stalks the land, make no mistake: He may look like a grim reaper, but he’s really a grim sower. An entire sowing bee of experts has so decreed. Indeed, in their warnings about sowing division, our betters are so non-divided that they give off the faintly creepy whiff of fellows all reading off the same cue card helpfully biked round to them by the Central Commissar ten minutes after the “incident” occurred.

You non-experts might think this a fairly crude sleight of hand – that concerns about “division” is a not so subtle way of suggesting that the real problem isn’t guys like Salman Abedi waiting with his nail bomb at the exit to the pop concert, but divisive types like you querying whether it’s prudent to keep importing more and more Islam into the western world. Well, screw you: if you disagree that the real danger here is the sowing of division, you’re just sowing even more division.

Pace The Toronto Star, I’m not sure it is “stating the obvious” to say that Monday’s attack was meant to “sow division”. What’s going on in Britain and Europe occurs because division has already been sown. It was sown by a careless political class that insisted there could be no questioning of a reckless demographic experiment. It is being reaped, as the division-sowing pop star Morrissey has divisively noted, by the political class’ hapless citizenry.

Not so long ago, during the “Troubles”, Britons were still permitted to notice “the obvious”: There was a “division”, fairly profound, between those who favored a United Kingdom and those who favored a united Ireland. Regrettable as it may be, it was openly acknowledged – and, indeed, reconciling the “division” and the contradictions was the heart of the Good Friday Agreement et al. In this century, a 2013 post-Charlie Hebdo poll for the BBC reported that 24 per cent of British Muslims believe that “violence against people who publish images of Mohammed can be justified” (see here – and enjoy the non-divisive BBC headline). A 2006 poll for Channel 4 found that 28 per cent of British Muslims dreamed of the United Kingdom becoming an Islamic state, and 19 per cent “respected” Osama bin Laden.

But, unlike the Irish, that division can never be acknowledged.

(Speaking of Ireland, 37 per cent of Irish Muslims think the Emerald Isle should be an Islamic state. That’s not the answer to the Irish Question Gladstone would have come up with, but it seems as likely as any of the traditional choices.)

Manchester’s Soldier of Allah lived his entire life on the other side of that unacknowledged division. So too did his family, and large numbers of their social circle (as we’ll explore later this week). And so too will thousands and thousands of those arriving at Dover and Gatwick and Manchester today, and tomorrow, and the day after.

Britain is “divided”, perhaps fatally. It’s not so much the comparatively small numbers of suicide bombers, or even the support group of family and friends – the dad who works at the mosque pending his return to the battlefield, the sister who congratulates him on entering Paradise, the sister’s schoolmates who drop out to be become brides of Isis, the bomb-maker who lives down the street, the other friends and family who turn a blind eye to it all. Beyond all that is the larger comfort zone of “British” Muslims who support the ultimate goal of Salman Abedi – an Islamic state where once was England – and for the most part live their daily lives as if it’s already here. “Britain” has no purchase on them, and its “values” command no allegiance – even though, lest they give offense, non-divisive officials are careful never to spell out precisely what those “values” are”. Easier to chant the approved abstractions, and warn against the non-approved ones: Diversity good, division bad.

But in Britain and Europe they sowed diversity and reaped division. Tthe ever widening division was sown by Mrs May and M Juncker and Frau Merkel and all the others who insist on importing more Abedis and more of those who turn a blind eye to the Abedis, day by day, year on year. Only when that ends can there be even the possibility of healing the division.

Otherwise, on this present course of dishonesty and evasion and the (so far) metaphorical shooting of unwelcome messengers like Katie Hopkins and Tommy Robinson, there will, one day, be an end of an entirely different kind to all this “division”. As I wrote a week ago:

In a decade it will be worse, and in two decades worse still, and then in three decades people will barely recall how it used to be, when all that warmth and vibrancy of urban life that Owen Jones hymns in today’s Guardian is but a memory, and the music has died away, and Manchester is as dull and listless as today’s Alexandria.

Some readers queried what exactly I meant by that. I’ve mentioned Alexandria before – used to be a lively place in Lawrence Durrell’s day, full of Brits, Greeks, Jews, gays… All gone. And now Islam is king on a field of corpses, and the place is a crashing bore. But no one in the new Alexandria reads Durrell, and you’d have to be – what? – seventy to have even a dim recollection of the way it was. The point of time is that it passes, and what is gone is lost from memory. Your three-score-and-ten fly by, and everyone younger than you accepts the here-and-now as the way it always was. As Hippocrates wrote, “Vita brevis, ars longa“: Life is short, art is long. But, when life changes as fast as Manchester is changing, art and culture change, too. I was struck by this passage from my old colleague Matthew d’Ancona, now apparently writing for GQ:

No place better exemplifies that spirit of resilient collective identity than Manchester – the city that has been home to the cussed spirit of Morrissey, the glory of Manchester United and Manchester City, the unmistakable art of LS Lowry, the comedy revolution of the Eighties, and the genius of Alan Turing…

No matter. None of those names – Morrissey, Lowry, Turing – is “cherished” in the world in which Salman Abedi’s parents raised him, and all will be forgotten as Britain’s division widens, and the likes of the Abedis multiply. To be sure, there’ll still be a Lowry or two hanging in the museum. But eventually they’ll destroy the museums, too.

I have been reading the French archaeologist Paul Veyne’s elegant, bitter monograph on Palmyra: An Irreplaceable Treasure. To Veyne, Palmyra was, with Pompeii and Ephesus, one of the three greatest surviving sites of the ancient world – until Isis smashed it to smithereens, and beheaded its curator, Khaled al-Asaad.

Why? What threat could the ruins of Palmyra pose to Islamic hegemony? Professor Veyne:

Why, in August 2015, did ISIS need to blow up and destroy that temple of Baalshamin? Because it was a temple where pagans before Islam came to adore mendacious idols? No, it was because that monument was venerated by contemporary Westerners, whose culture includes an educated love for “historical monuments” and a great curiosity for the beliefs of other people and other times. And Islamists want to show that Muslims have a culture that is different from ours, a culture that is unique to them. They blew up that temple in Palmyra and have pillaged several archaeological sites in the Near East to show that they are different from us and that they don’t respect what Western culture admires.

That is true. But I would go further. As Orwell said, he who controls the past controls the future. Isis and Boko Haram and the Taliban obliterate the past in order to eliminate any possibility of a future other than theirs. They smash all evidence of the pre-Islamic past so that there remains not even the dimmest sense of any alternative to them. That was the project Salman Abedi was embarked on in Manchester last Monday. It must all go: Palmyra, and L S Lowry, and Ariana Grande.

And then across a vast wasteland we can finally have a society entirely without “division”.